Even with four days to take it all in, it’s impossible to experience everything that PAX West has to offer. That’s especially true if you spend hours at a time waiting in line for a taste of the upcoming triple-A games.

Rather than burning all day at PAX in lines, I invested my time in the expo halls at PAX checking out dozens of indie games. Here are some of the indie game highlights of the show, in no particular order: 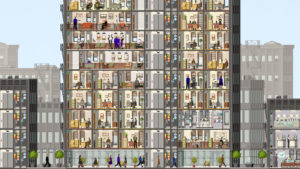 I’m a total sucker for simulation games. Project Highrise is the second game from SomaSim, a two-man development team from Chicago. Rather than building a city like most games in the sim genre, players design, build, and manage a skyscraper.

Project Highrise comes out on September 8th on Steam. 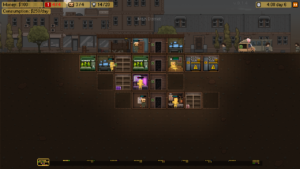 Another twist on the simulation genre, Basement at first looks similar to Project Highrise, but instead of simulating building operations, Basement is a drug production & drug dealing sim. The three-man team developing Basement is from Belarus.

I spoke with one of the developers about their inspiration for the game. “A lot of people ask if our game is inspired by ‘Breaking Bad,'” he explained in a delightful Russian accent. “It’s not, we haven’t even seen that movie.”

Basement is out now on Steam.

Ryan Juckett, the one-man developer of Inversus describes his game as “a negative-space shooter for one to four friends. Player movement is constrained to opposite colors of a black and white grid.”

Juckett left Bungee after working on Destiny to go solo, and Inversus is his first independent game. It was featured in Round 2 of the Omegathon here at PAX West, and is out now on Steam and PS4 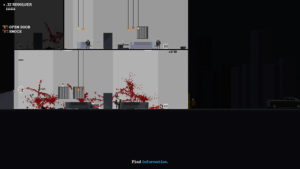 DEADBOLT is a stealth action game in which “you to take control of the reaper to quell the recent undead uprising.” It’s similar in some ways to the 2013 indie darling Gunpoint, but with less hacking and more slashing.

The game was created by Hopoo Games, a two-man team made up of Paul Morse and Duncan Drummond, who both graduated from UW with degrees completely unrelated to video games. Deadbolt is their second game. Their first game was Risk Of Rain.

DEADBOLT is available now on Steam. 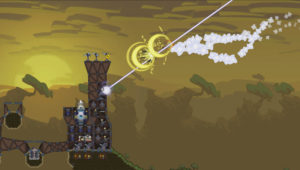 Part Worms, part World of Goo, part Starcraft, Forts is a real-time strategy game where players construct and arm their own fort as they attempt to destroy their enemy’s fort. PAX West 2016 was the Australian team’s first time bringing their game to the states.

Forts will be released on Steam later this year.

Overload is a “6-degrees-of-freedom” game (Descent-like) that ran a successful Kickstarter campaign in March. The game is coming along quite nicely, and looks amazing. I had the chance to play their demo in virtual reality, which was great.

Overload is approaching a private beta, and has not yet set a release date.

Do you like Poker? Do you like RPGs? Do you like to cheat? If you answered “yes” to those questions, Lords of New York is right up your alley. It’s a “Poker RPG” in which you build your character’s skills and abilities through a series of poker hands. With skills like peeking at your opponents’ cards or swapping out their cards to destroy a great hand.

The developer Lunchtime Studios is a small team based in Sammamish, WA.

Redout is a super-high-speed futuristic racer, very similar in feel to the F-Zero series, but with an interesting twist in controls. Since the cars hover just above the track, players must manage not only typical left/right steering, but also pitch/yaw as the tracks soar, sink, and loop.

The visuals are impressive, and the whole game really has an exhilarating feel of extreme speed. This is the second game from the developer 34BigThings, a small team from Milan Italy.

Redout is available now on Steam.

Death Squared is a co-op puzzle game that feels like a cross between the 2010 Microsoft-exclusive puzzler ilomilo and Valve’s Portal 2. Players work together to solve mind-bending puzzles as cute colored robot cubes, ideally without repeatedly sending each other to a sparky death.

Death Squared is developed by SMG, another team from Australia. They have released a number of other games in the past, but have until now focused on mobile—this is their first PC/console game.

Another puzzle game reminiscent of ilomilo, She Remembered Caterpillars is a color-based puzzler by Jumpsuit Entertainment, a small developer based in Kassel, Germany. It has a delightful art style, tricky puzzles, and a touching story.

She Remembered Caterpillars will be available in late 2016 on Steam. 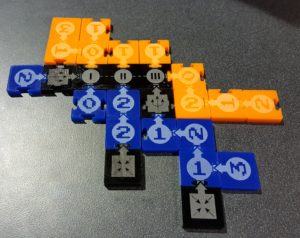 Breaker Blocks is a two player competitive puzzle game by Philadelphia game designer Jake Vander Ende. He personally creates every copy of the game using his Epilog laser cutter to cut and etch all the game pieces out of acrylic. His company Spriteborne also creates custom glasses, jewelry, and another game called Yomi’s Gate.

You can buy Breaker Blocks from the Spriteborne site. 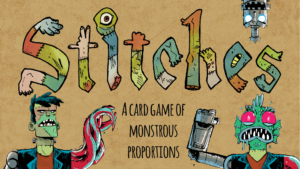 Stitches is a “semi-co-op brawling card game” for three to seven players designed by Seattle area dads Doug Brinbury and Jason Rankin. Players replace the limbs of their monsters, battle each other, learn new words, and eventually team up to battle “The Abomination.”

Brinbury and Rankin are planning to launch Stitches on Kickstarter in October. 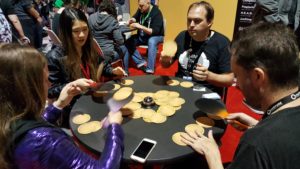 Flapjack flipout is the latest game from Lynnwood game designer and former Geek of the Week Peter Newland. Two to four players compete in a race of dexterity and memory to fill pancake orders at “Flappin’ Jack’s” restaurant. With similar elements to “Pit,” a typical match lasts just a minute or two, and can get a little crazy.

Newland is currently in talks with a publisher about bringing Flapjack Flipout to market. 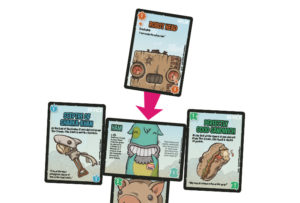 In JunKing two to six players compete as “Scavenger Imps looking for valuable pieces of discarded garbage from both our world and the Imp Lands that bestow prestige by their mere possession.”

Designed by another Seattle local David Gerrard, JunKing has fun, lighthearted art and a quick playtime. You can buy JunKing from Gerrard’s site.

The Shadow Over Westminster 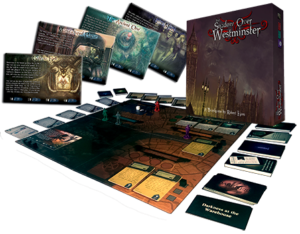 Seattle-area game designer Robert Huss successfully raised over $30,000 on Kickstarter in 2014 for his co-op horror board game The Shadow Over Westminster. It has great art and a dark theme. Players work together to stop the end of the world… with some occasional betrayal.

You can buy the game on Huss’s site.

Game designer Craig Stern has been working on True Messiah since 2003, and is finally almost ready to bring it to the world. Set in a post-apocalyptic Earth, two to four players compete to gather followers, perform miracles, and destroy their rivals.

True Messiah will launch on Kickstarter later this month.