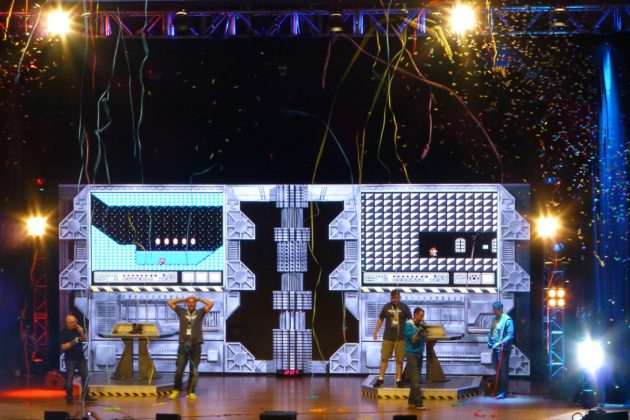 It’s going to be tough for the organizers of PAX to out-do themselves after this. For the big finale of the thirteenth annual PAX West (and twenty-fifth PAX overall) Penny Arcade Director of Events Ryan Hartman created a full-sized replica of the “Video Armageddon” tournament finale set from the “The Wizard”.

Well-known among gaming circles, “The Wizard” is a 1989 movie starring Super Mario Bros. 3 and Nintendo’s Power Glove NES accessory. Oh, Fred Savage was in it, too.

Hartman “had been dreaming of this one for a few years,” he said after the show. “The 25th PAX made the most sense. We contacted a team to design the digital assets and manufacture the pedestals.”

The whole thing came together in about a month. Hartman had been “toying with the idea of an actual fabricated set,” but in the end the team decided on a digital/physical hybrid, where the main background was an animation around an LED wall and the podiums were fabricated from wood and metal.

So what’s going to happen to the set post-PAX? “It’s going to be sent to our office probably as a trophy and great reminder,” said Hartman.

As for the final two contestants in the Omegathon—Jordon “myxomysosis” Story and Charles “Mighty” Middleton had ten minutes and unlimited lives to score as many points as possible in Super Mario Bros. 3. If the name “Mighty” sounds familiar, it’s because he was the runner-up in last year’s Omegathon, which also featured a Mario competition. His second place finish earned him a free pass to this year’s event, in which he bested eighteen other Omeganauts to make it back to the final round for the second year in a row.

Unfortunately for “Mighty,” Mario was his undoing yet again as he was bested by “myxomysosis” in the high score competition. Afterward we spoke with him about his déjà vu experience. “I can only assume they tailored this round just for me,” he remarked. “But it’s OK, I will just flex my gamer muscle and get to the finals again.”

“I will, however be playing some Mario in the meantime,” he added.

You can watch the entire Omegathon finale via the PAX Twitch channel here.