It’s a good time to be a sous vide home chef — and to be a high-tech cooking startup in the Seattle region.

Sous vide is a cooking technique that involves the immersion of food in plastic baggies in temperature-controlled water baths for extended periods of time. The result: evenly and precisely cooked food. The technique used to be practical only for labs and high-end kitchens that could afford the expensive, bulky equipment on the market.

But now, four different Seattle-based cooking tech startups have come out with their sous vide devices — all designed with the home chef in mind.

Why Seattle, and why sous vide? Representatives of the four startups offered a variety of theories. Some think it might be the current engineer-saturated population, food culture, or the boom in hardware startups in general. Others disagreed with all of those theories. What they could agree on was that one man was central to the interest in sous vide in the city: Nathan Myhrvold.

Myhrvold is the former Microsoft chief technology officer, the controversial leader of the Intellectual Ventures patent holding company, and author of the Modernist Cuisine cookbooks. To differing degrees, Myhrvold influenced all of the sous vide startups, directly or indirectly, at some stage in their development.

“Nathan and his team were here…figuring out all the rules of sous vide cooking,” said Scott Heimendinger, co-founder and chief marketing officer for Sansaire, whose sous vide machine ($199) was the first on the market,

To be fair, self-professed “food geek” Heimendinger had already started to develop the 4-pound immersion stick device that would become Sansaire’s sous vide machine by the time he accepted a position as the research director for Modernist Cuisine and met Myhrvold. Still, he said that Myhrvold’s books opened the door for sous vide enthusiasts in Seattle and beyond.

“Before Modernist Cuisine there were no books to reference, so you had to figure it all out by yourself, which most people weren’t willing to do, especially when the equipment available at that time was so expensive,” he said. “Nathan’s cookbooks played a big role in creating a mainstream market for sous vide.”

Rich Moran, founder and CEO of SousVant, agreed with Heimendinger’s about Myhrvold’s overall impact on the sous vide market. While Moran didn’t know Myhrvold personally, he read Modernist Cuisine and it was sous vide cookbooks—specifically, he mentioned Thomas Keller’s Under Pressure: Cooking Sous Vide—that inspired him to create his own all-in-one sous vide countertop device. His device turned into the SousVant circulating sous vide oven ($399 through Tribest). Moran’s invention has the advantage of requiring no pot, since cooking water goes directly into the device.

For Chris Young, co-founder and managing director of ChefSteps, it was a more personal link to Myhrvold that began his journey into sous vide gadgetry in Seattle. Almost ten years ago, Young was working as the head of Fat Duck’s culinary research and development, where he first was introduced to Myhrvold, he said.

When Young decided to move on from the restaurant, Myhrvold asked him to come to Seattle to co-author Modernist Cuisine. There, Young developed an interest in helping home chefs learn different cooking techniques, including sous vide, which led him to the formation of ChefSteps, which developed the ChefSteps Joule sous vide device, unveiled in November 2015 and now available for preorder at $229, with an expected retail value of $299.

“[I]n a world where tech is changing everything, the kitchen and how we cook have stayed largely the same since the 1970s,” Young said. “But smart cooking companies are changing that.”

Like the Sansaire, the Joule is an immersion stick, though it is lighter and smaller than any other sous vide stick on the market. With no digital display of its own, the Joule also blends hardware and software, relying on a sophisticated smart phone app to help chefs heat and time their cooking.

Finally, Darren Vengroff, co-founder of the startup Meld, also had a Myhrvold connection, and one pre-dating those of the other sous vide startups. Vengroff used to work as the technology advisor to eGullet.com, a website for the cooking community. Over a decade ago, Myhrvold posted on an eGullet forum, asking for temperatures and cooking times for sous vide, Vengroff said. When he found no answers, Myhrvold declared his intention to figure it out himself and someday write a book, which, of course, became Modernist Cuisine. 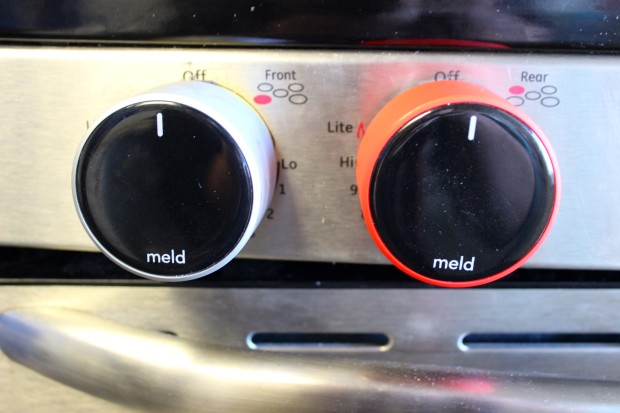 Myhrvold’s post contributed to the online cooking community’s and Vengroff’s interest in sous vide, Vengroff explained. From eGullet, Vengroff went to work on an app for PolySciences, one of the early laboratories possessing (very expensive, very bulky) sous vide technology, and then he invented Meld’s smart knobs for the stove, which used thermometer readings from heating food to automatically adjust burner intensity, keeping food exactly at the right temperature.

The Meld smart knob was announced over KickStarter in April of 2015, but then recalled due to Meld’s acquisition by a yet-unnamed company with an interest in the smart cooking market, so it’s not yet available for sale and it is unclear whether it will be in the future.

With such a big influence on the Seattle sous vide scene, it seems only right to conclude with a word from the man himself. In a 2011 interview with Spiegel online, Myhrvold explained why he likes sous vide cooking, “It is very carefree and very accurate in temperature, which means you get the precise results you were aiming for every single time. You also conserve the flavors.”