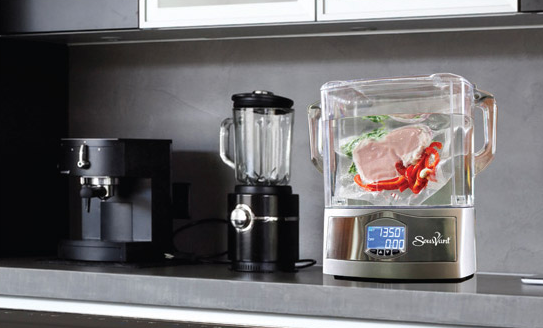 Professional chefs and advanced home cooks have long extolled the benefits of sous vide cooking, using a water bath to evenly cook cuts of meat and other food at precise temperatures. Sous vide kitchen appliances are not new, but a startup from the Seattle region believes it has come up with a device that will make this style of cooking much more accessible to the average person in the kitchen.

The applicance, SousVant, launched on Kickstarter last week, with the founders seeking to raise $85,000 to fund the first round of production.

The machine comes with simple controls, a removable carafe of water, a built-in thermometer, and a tight lid, in a device the size of a large toaster. It was invented by SousVant co-founder Lynn Neff after he received a cookbook from his wife on sous vide cooking, and found the existing sous vide appliances to be too complicated, large, expensive and generally difficult to use.

A minimum pledge to receive one of the machines is $299 through the Kickstarter, compared with an anticipated $399 retail price.

Neff’s partner in the business is product development veteran Rich Moran of Redmond, Wash. Moran notes via email that the SousVant is ideal for Kickstarter because it’s ready for production, with testing and safety certifications complete and a factory lined up.

It’s part of a broader trend of home kitchen automation, in areas ranging from home beer brewing to coffee. By the way, that home beer brewing machine, the PicoBrew Zymatic, also doubles as a sous vide machine, underscoring the increasingly competitive nature of the market.