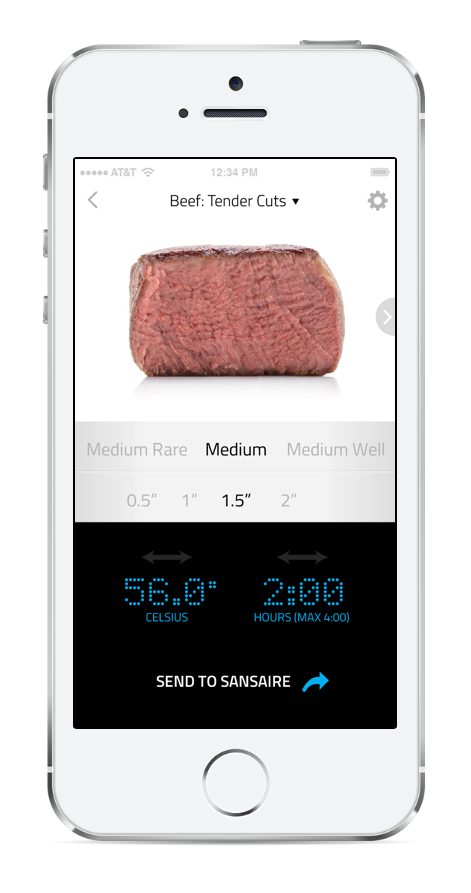 The Sansaire Delta, like its predecessor, heats water to precise temperatures for even immersion cooking. But the new device has a much different design, overlapping the edge of a pot rather than standing tall out of the water like the original Sansaire device.

Sansaire is also launching a companion app for iOS and Android so home chefs can control water temperature, timing, and desired level of cooking from their smartphones. Among other features, the app sends notifications when the target cooking time and temperature for a particular food is reached.

“Our aim has always been to make perfect cooking easier for home chefs,” said Valerie Trask, Sansaire co-founder and chief operating officer. “We built the Sansaire Delta as a response to our customers’ request for a device that’s smaller; connected; can be used with or without a phone; and with the same degree of style they received in the original Sansaire.”

The Sansaire Delta will sell for a suggested retail price of $249.

Sansaire is competing in a crowded space. Sous vide, a style of cooking that involves immersing food in controlled temperature baths, has become something of a movement, and Seattle is at the center of it — with several companies in the region developing and selling at-home sous vide devices.

One common thread is Nathan Myhrvold, the former Microsoft CTO who now leads patent holding and technology development company Intellectual Ventures, the author of the “Modernist Cuisine” cookbooks. Scott Heimendinger, who was co-founder of Sansaire, is technical director for Myhrvold’s Modernist Cuisine company.

Myhrvold co-authored the Modernist Cuisine cookbooks with the founders of one of Sansaire’s top rivals, ChefSteps. Joule, ChefSteps’ sous vide device, starts shipping in September at a retail price of $199.The Sansaire Delta puts the company in more direct competition with Joule, which is also controlled via a smartphone app.

Sansaire’s original flagship sous vide circulator raised $823,003 in its crowdfunding campaign, setting the record as the number one most-funded food product on Kickstarter. The Sansaire Delta’s Kickstarter goal is set at $100,000.