Much of the focus at the big Consumer Electronics Show this year was about technology changing how we drive, how we eat, how we sleep, how we work, and much, much more.

But another theme of the annual event was about technology changing sports and fitness, from how athletes can improve their training regime, to the ways fans watch games on their couch or in the stadium.

This was evident everywhere in Las Vegas last week, whether you were on the show floor — with guys like Shaquille O’Neal and Alex Rodriguez — checking out hundreds of sports tech startups showing off their latest innovations, or at the 90-minute Intel press conference where the tech giant dedicated half of its presentation to sports.

To get a feel for the current state of the sports technology industry, I sat in on a “Tech Investing in Sports” panel as part of the inaugural Sports Business Forum, a four-hour event hosted by Turner Sports at CES. Speakers included Dallas Mavericks owner and active entrepreneur Mark Cuban; Intel CEO Brian Krzanich; former NBA superstar O’Neal; and Joseph Raine, co-founder of Raine Group.

Talk about an eclectic and unique mix of folks for a CES panel.

Krzanich, who announced Intel partnerships with companies like ESPN, New Balance, and Red Bull at his company’s CES press conference, said that the uptick in sports technology-related investments can be simply credited to improvements in technology itself. He cited innovations like virtual reality and wearable devices that are now ready to be used by the masses.

“It’s hitting a breakthrough,” Krzanich said. “If you think it’s big now, just wait until the next two or three years when we’ll have another set of breakthroughs.”

Krzanich added that “you almost have to bring technology to sports — otherwise it will fall behind.”

“As you go around the world and talk to various industries, almost every industry is realizing that technology is bringing efficiency or new customers or new ways to look at data,” he said. “Those that don’t adopt technology are falling behind, and I think the sports community is just seeing the same thing.”

Cuban noted that sports has become a bigger business over the past few decades — one that will likely continue growing worldwide — and there are “smarter owners across all the different leagues.”

“Of course we’re going to use technology, just like any other industry, to be smart,” said Cuban, who has a net worth of about $3 billion. “Sports competes with every other method of entertainment. We have to compete like everybody else to be smarter, better, and faster. Investing in technology is one important way to get there.” 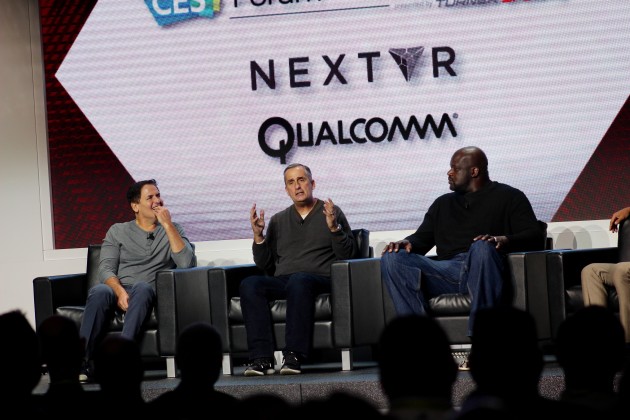 Raine, an investor in companies like DraftKings and Zumba Fitness, said that there is now more technology that is “sports-specific.” He added that he’s particularly interested in the data side of sports technology.

“Whether it’s being used for betting or gambling, or to help coaches make judgements on whether to substitute certain players in and out, it’s incredibly valuable,” Raine said of the data.

“You have these sports where not everybody knows what exactly is going on,” he said. “Technology can help with that. We showed that in our keynote — we can put technology on snowboards, on bikes, on skis, and give real-time information and engage fans and actually bring new people into these sports because they aren’t foreign anymore.”

Data can also be used to improve the live sports viewing experience. Shaq noted how the new Sacramento Kings arena — hailed as the “21st Century Colosseum” — will enable teams to engage more with their fans, perhaps knowing what food and drink they ordered during their last visit and asking them if they’d like the same order delivered to their seat.

However, Cuban brought up an interesting point, noting that he doesn’t want his arena full of people looking down at their smartphones for the entire game. He said the “energy you feel when you walk into an arena is the most valuable part of our product we own.”

We try to do everything possible to keep fans from using technology while the game is being played.

“I learned very quickly that anytime I have somebody looking down at their phone, I lose a little bit of them,” said Cuban, who bought the Mavericks in 2000 for $285 million and has seen its value grow to $1.15 billion today. “We try to do everything possible to keep fans from using technology while the game is being played.”

Cuban added: “There is no other place where you pay money and go and get an experience where you hold your breath when the ball is in the air and you are either elated and high-fiving people you’ve never seen before in your life or you’re moping with them as you walk out the door. We have to be very careful that we don’t do anything to take that away.”