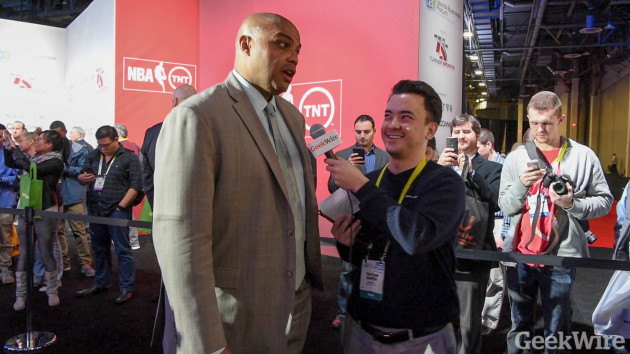 GeekWire had the fun opportunity to chat with former NBA stars and current analysts on TNT’s “Inside the NBA,” a nine-time Emmy Award-winning postgame show with host Ernie Johnson that airs after NBA on TNT games.

Turner also broadcasted “Inside the NBA” from the CES show floor. Before going on air, Shaq, Sir Charles, and Kenny spent some time with GeekWire to talk tech. 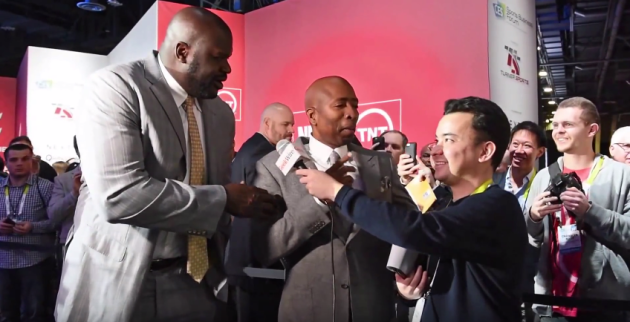 Shaq, a longtime business entrepreneur and investor, is clearly the most tech-savvy of the bunch. I asked him if he was the world’s tallest geek.

“I would absolutely agree with you,” Shaq responded.

The 7-foot-1 giant admitted that he was a “bully to the geeks at a younger age” but gained appreciation for them after a schoolmate named McDougle helped him pass government class.

“I realized that just because he’s smarter, doesn’t mean he’s not cool — this guy was the coolest guy in our school,” said the four-time NBA champion and three-time NBA Finals MVP. “I realized that being a geek is not all that bad. If it wasn’t for geeks, Shaq Man wouldn’t be who he is today. So, McDougle, wherever you are, thank you, brother.”

But while Shaq, who said his favorite app is Shazam and calls CES the “Toys ‘R’ Us” for gadgets, embraces technology — he’s a frequent attendee of CES — Barkley might just be the opposite. When asked about his absence from social media platforms, the 11-time All Star responded immediately.

“I don’t feel the need to talk to all these jackasses out there,” Barkley said. “I’m never going to do any social media. The Internet is where losers go to feel important. Everybody wants to voice their opinion on every single subject and person on the world — that drives me nuts.”

Barkley also said he “doesn’t believe in analytics” in the sports world.

“I think the team that has the best players are always going to win,” he said. “Stats are just stats. They call them analytics so they can charge you more. They might have some positive effects, but you still need to have the best players.”

Smith, meanwhile, said that being at CES was like seeing a real-life version of The Jetsons.

“That world we saw in the cartoon world is in actuality here,” he said.

“The Jet” noted that former Microsoft CEO Steve Ballmer, who bought the Los Angeles Clippers for $2 billion in 2013, is “great for the game,” particularly with his “unmatched and unparalleled” enthusiasm. Smith also said he hopes the NBA one day returns to Seattle.

“That was one of my favorite places to play.” he said. “The enthusiasm of the fans, the closeness of the sold out arena. Gary Payton, Shawn Kemp, Derrick McKey, Sam Perkins, George Karl — that era was unbelievable basketball and I would definitely miss that.”