LAS VEGAS — Twisting BMX bikers with sensors in their seats. Flying drones that can avoid unknown obstacles. And robots that guard your front door.

Intel’s keynote at the Consumer Electronics Show was certainly epic. 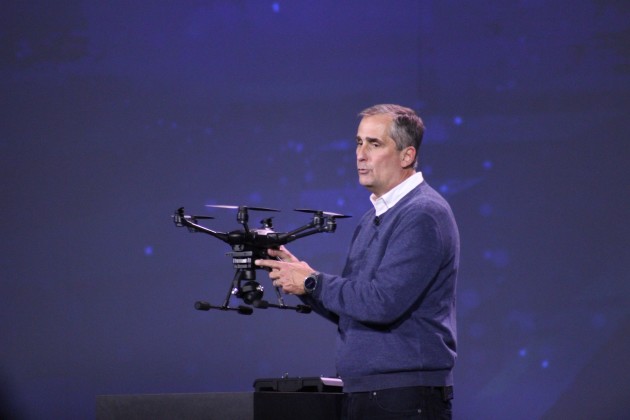 Heck, there was even a geek fashion show, and a concluding technology-fueled concert led by Slum Dog Millionaire composer A.R. Rahman doing a wild rendition of his hit song Jai Ho.

Clocking in at more than 90 minutes, Intel CEO Brian Krzanich led the packed house on the journey, covering plenty of bases.

It alll started with a video showing an amazing video of fireworks, but not ordinary fireworks. These were lit drones moving to the beautiful musical patterns of an orchestra.

Krzanich’s point? Technology is changing everything, even age-old traditions like fireworks.

Nearly half of the keynote was devoted to the intersection of sports and technology, but Krzanich also touched on how technology was changing the workplace (showcasing a Daqri smart helmet) and the fashion industry (with clothes that changed based on your mood).

The entire talk injected a sense of fun and importance into where the technology world is headed in the coming months, not in the coming years as much of CES is about.

It was easy to get lost in all of the action, but Krzanich kept things moving, anchoring the talk around three key themes:

—The world is becoming smart and connected.
—Computing is gaining depth and perception, what he called the “sensification” of computing where it expands beyond the limits of its silicon.
—Computing is becoming an extension of you. It is part of your daily routine.

“Technology is opening up the doors to more forms of expression and creativity than ever imagined,” said Krzanich, who took the reins of Intel in 2013. “Technology truly unleashes the creativity inside all of us.”

In Intel’s view, technology is entering a new era, one in which “consumers are choosing experiences over products,” said Krzanich.

To give you a sense of all of the action, here’s a look at the final musical number of the night led by Rahman, using new music technology powered by Intel.