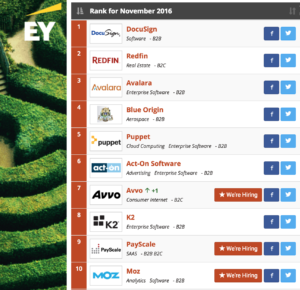 As most of us settle in with a big glass of egg nog for the holidays, many of the top startups in the Pacific Northwest are busy putting big funding rounds raised throughout the year to work, using them to grow their staffs, add new products and expand into new realms. These moves are reflected in the latest update of the GeekWire 200 list of the top privately-held startups in the Pacific Northwest.

The top five remained static this month with DocuSign at the top, followed by Redfin, Avalara, Blue Origin and Puppet. The only movement in the top 10 saw Avvo jump over K2 to land in the seventh spot.

Venture capital data source PitchBook graduated from the list after financial information juggernaut Morningstar last month announced plans to purchase the remaining shares of PitchBook that it did not already own for $180 million. The transaction values PitchBook — which employs more than 600 at offices in Seattle, New York and London — at $225 million.

Click for the full November update to the GeekWire 200 and continue reading for highlights.

Seattle-based Textio, which seeks to answer the questions of “how can we recruit the best talent” and “how can we create a more diverse workforce,” was one of the biggest risers this month, up 23 spots to number 176 on the GeekWire 200 after debuting on the list last month. More than 7,000 companies use Textio’s tools to improve the performance of job listings and attract underrepresented groups. And now Textio is making that data public, releasing analysis of job listings from nearly 60,000 companies and ranking companies based on the performance and gender neutrality of language in job listings.

Zenoti, which helps spa and salon chains manage their businesses, is closing in on the top 50 after rising 10 spots to number 51 this month. The Mercer Island, Wash.-based startup raised $15 million in August to help the six-year-old company expand geographically and enter the fitness and yoga arena. Software developers Dheeraj and Sudheer Koneru co-founded the company after running a 10-outlet spa chain in Hyderabad, India, and discovering that spas had no single piece of software to help them manage and expand their business.

Seattle-based Dolly, which connects smartphone owners needing to move big, bulky items with vetted contractors who have large enough trucks to do the job, moved up 14 spots to number 165. The 2016 GeekWire App of the Year finalist piqued our interest with an intriguing guerilla marketing tactic earlier this year: a billboard above a Whole Foods store in Seattle’s Ballard neighborhood that simply read “Muck Foving.com.” The web address serves as a landing page for the app that launched in February 2014, and shortly after moved from Chicago to Seattle. 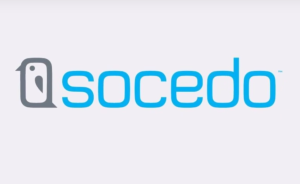 Socedo helps marketers generate sales leads from social media activity, and it has seen plenty of activity this month, moving up 14 spots to number 171 on the list. Earlier this year, the Seattle-based startup and 2013 graduate of the Microsoft Windows Azure accelerator raised $1.5 million.

In August, the company announced integration with Marketo, a leading producer of marketing automation software, to further streamline the process of finding sales leads on social media brands like Microsoft and TalentWise.

Portland-based Cozy, debuted on the list last month, and in November it was one of the biggest movers, rising 10 spots to number 161. In August, Cozy announced an $8.45 million funding round that will help the startup grow its property rental management platform, bringing its total funding to approximately $18 million. Cozy helps landlords in all 50 U.S. states screen tenants, check credit, and collect rent money online — both from desktop and mobile.

Four companies made their debut on the list this month: Human, Doxo, Skooli and Boatbound.