You’ve been there before. An unwieldy mattress or dresser needs moved out of the house, but you don’t own a pickup truck. What do you do?

If you’re like many Americans, you probably call that buddy or relative who owns a truck.

That’s the name of a new online marketplace that — like Wagon or Ghostruck — looks to take the hassle out of moving big, heavy items. 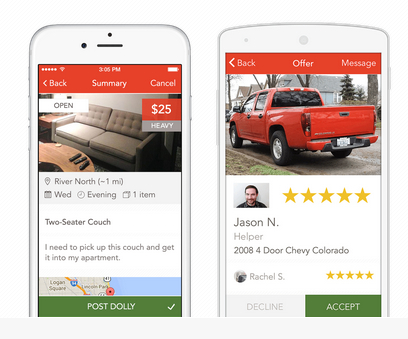 Led by former Wetpaint executive Mike Howell, Dolly recently completed a move of its own, relocating from Chicago to Seattle in September. The service, which is available in Chicago, plans to make its debut in Seattle soon.

Dolly’s premise is pretty straightforward.  Connect people who have trucks, with those who need help moving items. Along the way, Dolly looks to take the pain out of what many consider one of life’s most stressful events: moving.

“Whether you’re moving apartments, picking up stuff you bought online or at a store, taking stuff to a charity or the dump, or the myriad uses for a truck in between, EVERYONE needs a truck at times, though relatively few people actually own one,” said Howell, who co-founded Wetpaint in 2005. “What’s more, the existing options aren’t good and haven’t changed in 50 years—asking a friend is awkward, truck rental is a hassle, and moving/delivery services are expensive, unpredictable, and untimely. People need a dead-simple, inexpensive, and totally reliable way to move bulky items from one place to another.”

Dolly was started in Chicago in February by Jason Norris, Kelby Hawn and Chad Wittman, the founder of EdgeRank Checker. Wittman came up with the idea after encountering a harrowing experience of strapping a mattress onto his car roof as part of a move to a new apartment.

From there, Dolly was born. Howell got involved, and moved the company to Seattle, saying they wanted to avoid the “blaring noise and overcrowded hype of the Bay Area.”

The 4-person company is now working on building out a network of background-checked “helpers” who serve as the movers and drivers in the marketplace. It is also working on the other end of the spectrum too, trying to find people who need help moving things like dressers, refrigerators and beds. Like Uber, all payment and tipping is handled within the Dolly mobile app. A 20 percent cancellation fee of the Dolly price is levied if the order is cancelled within 24 hours.

Howell said Dolly is focused on simplicity, affordability and certainty, and as part of that they guarantee pricing up front.

“That’s really hard to do when combined with an on-demand, peer-to-peer service, but we think it’s critical to holistically address the consumer need,” Howelll said. The other folks in the space use metered pricing and/or existing professional movers. We are the only ones reinventing how it should work, and we have a lot more in store.”

Speaking of other players, Seattle-basd Ghostruck — a graduate of the 9Mile Labs accelerator — just raised $1.2 million in startup funding last month. In announcing the round, founder and CEO Nathanel Nienaber they are trying to do for moving trucks what Uber did for taxis. Meanwhile, Seattle startup Wagon emerged on the scene this past summer, partnering with Seattle-based incubator and interactive agency Labs8.