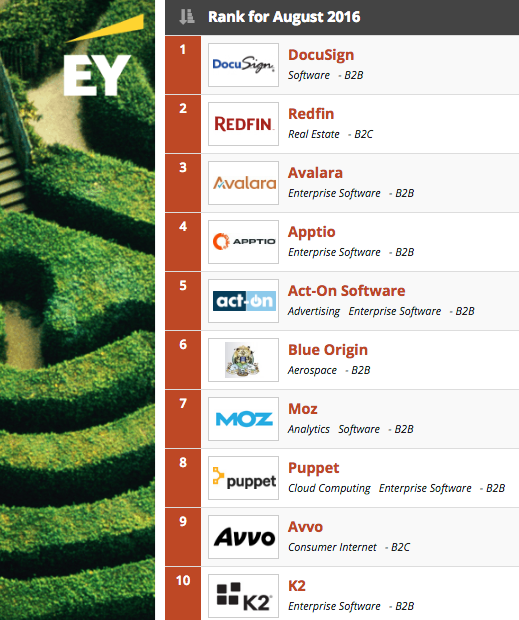 Commencement season has passed, but Impinj, one of the top companies in the GeekWire 200, has graduated from the list after completing an initial public offering late last month. The GeekWire 200 ranks the Pacific Northwest’s top privately held technology companies.

The IPO for the 16-year-old Seattle-based maker of Radio Frequency Identification technology marks the second IPO for a Seattle-based technology company this year. Biotech company PhaseRx completed its IPO in May. Before that the last Seattle-area IPO was biotech standout Juno Therapeutics in 2014.

Many of the top companies in the GeekWire 200 ranking of the Pacific Northwest’s top privately held technology companies have been mentioned frequently as potential IPOs, but none of them have made the jump. That has left little room for other companies to ascend to the upper echelon of the list for several months now.

However, health-care technology company Accolade, which has opened a second headquarters in Seattle, made its debut on the list at No. 15. The company, led by Concur co-founders Raj Singh and Mike Hilton, recently announced $70 million in new funding.

Click for the full August update to the GeekWire 200 and continue reading for highlights.

Redmond-based Kymeta Corp. is up 18 spots to number 74 on the list following a good start to the year. In January the satellite antenna company closed a $62 million Series D financing round to support a host of new initiatives by land, air and sea. Its investors include Microsoft founder Bill Gates, Lux Capital, Kresge Foundation and Osage University Partners.

The next day, Kymeta announced a collaboration with Toyota on a satellite antenna system that can send data to cars at broadband speeds.

Leafly, often called “Yelp for marijuana,” was named the fastest-growing privately-held company in the Pacific Northwest, according to an annual list from Inc. magazine published Wednesday. The Seattle startup was not the fastest mover on this month’s list; however, it did rise 11 spots to crack the top 100 at number 91.

Leafly has been on an upswing in the six years since it launched — navigating an acquisition, raising cash, and winning App of the Year at the 2014 GeekWire Awards.

Seattle startup Taqtile, which rose 16 spots to number 136, has been in the news a lot lately. The 5 1/2-year-old company built the official Democratic National Convention app. Taqtile previously developed the official app for the 2012 DNC in Charlotte, N.C., and the 2013 app for President Obama’s second inauguration. Taqtile’s augmented reality software was used to develop demos for the PGA Tour on Microsoft’s HoloLens, which GeekWire recently tested, and which VP of product development Kelly Malone showed off at Microsoft’s Worldwide Partner Conference in Toronto last month.

CrowdStreet is representing for the Rose City, rising 13 spots in this month’s ranking to number 179. The Portland-based commercial real estate platform landed $3.5 million in Series A funding in March. CrowdStreet connects investors to real estate developers or operators looking to raise private capital. Similar to something like Kickstarter, CrowdStreet essentially acts as the middleman and creates direct connections between the two sides that may have previously been restricted.

In addition to Accolade, other newcomers to the top 200 this month are  Zenoti, SkyWard, Volt Athletics, Tred, VRStudios, Spare5, Dolly, Boatbound and Just Biotherapeutics.

The top five remains unchanged this month with DocuSign at number one, followed by Redfin, Avalara, Apptio and Act-On Software.