The tour wants to find out, and it’s getting help from both Microsoft and a Seattle-based startup.

At The Players Championship tournament this past weekend in Florida, PGA Tour officials, sponsors and players had a chance to test out new demos on Microsoft’s HoloLens device that let folks interact with 3D models of different holes overlaid with a bevy of statistics.

Earlier this month, GeekWire tested the same demos inside the Seattle office of Taqtile, one of seven firms selected several months ago to be part of the Microsoft HoloLens Agency Readiness Program.

Taqtile developed the augmented reality software per a request from the PGA Tour, which is now working closely with Microsoft thanks to the three-year sponsorship deal it inked with the tech giant in November.

I strapped on the HoloLens device for my demo and soon had a bird’s-eye three-dimensional view of TPC Sawgrass — the course that hosts The Players Championship — which appeared on the physical wooden desk in front of me.

Using my fingers to interact with the content, I was able to compare player shot data from last year’s tournament, with colored lines showing individual shot patterns and an accompanying scoreboard to show me how players performed. 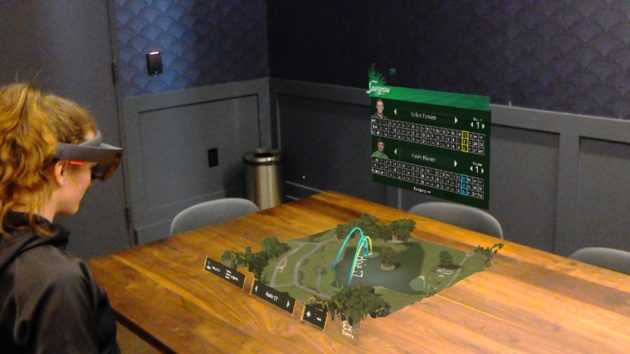 The demo was definitely cool. It was neat to interact with the course from above and see the hole-to-hole shot data for individual players — much more effective and engaging than looking at an Excel spreadsheet, for example.

I did, however, wonder how a device like HoloLens will really help golf fans, players, officials, and others. Taqtile VP of Product Management Kelly Malone explained that augmented reality gives people a whole new perspective.

“You can visualize things in a whole new way,” he said. “You can see things you couldn’t have seen before.”

“This also enables shared experiences,” Malone added. “Multiple people can be looking at the same hologram at the same time. This can be really helpful for a player-coach conversation.”

It’s certainly still early days for HoloLens and virtual/augmented reality technologies as a whole. But Malone, who worked closely with the HoloLens team as a Microsoft employee before arriving at Taqtile in April 2015, is convinced that the platform will provide serious benefit to an array of people.

“There are a lot of interesting scenarios for professional sports leagues, teams, and athletes themselves,” he noted.

Taqtile co-founder Dirck Schou echoed that sentiment, noting how his company specifically picked augmented reality — also known as “mixed reality” — as a platform to develop sports-related software given that it allows for interaction with the physical environment around a user.

“You could be holding a real putter and have something happen on the HoloLens when you make a putt — maybe a monster jumping out and grabbing your ball, or a hologram with fireworks,” Schou explained. “There is an amazing amount of things you can do with this.”

Malone added that sports leagues, like many companies around the world, want to use technology to reach younger customers. Testing something like HoloLens is one way to do that.

“Embracing new technology is a way for them to appeal to that younger audience and get them re-engaged in a sport,” he said.

Taqtile, a five-year-old startup that employs more than 80 people across six offices around the globe, has mainly focused on mobile app development — it built Windows apps for HotelTonight and other companies — but is now spending more time with HoloLens given its participation in the readiness program.

The bootstrapped firm is also building a HoloLens app for Real Madrid, which inked a four-year partnership with Microsoft in 2015. Schou and Malone are headed to Madrid later this month to further their work with the incredibly popular soccer club that is the highest-valued sports franchise in the world.

I tried a brief demo of that app, which is meant for a “VIP fan experience” and includes stadium data, player statistics, and more. It’s similar to what Microsoft teased with its HoloLens NFL video last year. 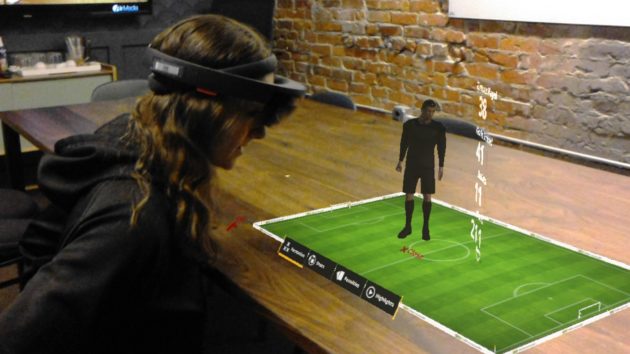 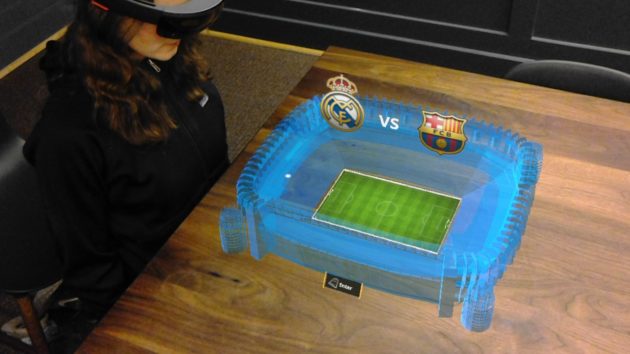 It’s difficult to wrap your head around how exactly leagues, players, coaches, and fans will utilize this type of technology. But Taqtile, which has spent the past several months working with the HoloLens team in Redmond, is bullish about the possibilities.

Taqtile is also excited about the intersection of sports and technology, having built mobile apps for teams like the Minnesota Wild and schools like Penn State and Stanford University. It’s something the firm shares in common with Microsoft, which continues to invest heavily in golf — for example, it just announced sponsorship of the KPMG Women’s PGA Championship next month and showed off how its technology is being used by PGA Tour employees and volunteers.

Along with the PGA Tour and Real Madrid deals, Microsoft has partnerships with the NFL, NASCAR, and other organizations.

“When we look at where we want our products to show up, one of the questions you ask is, what are people’s passion points?” Microsoft Chief Marketing Officer Chris Capossela told GeekWire last month. “A few of them really spike to be much, much bigger than all the rest. Sports is really high on the list.”