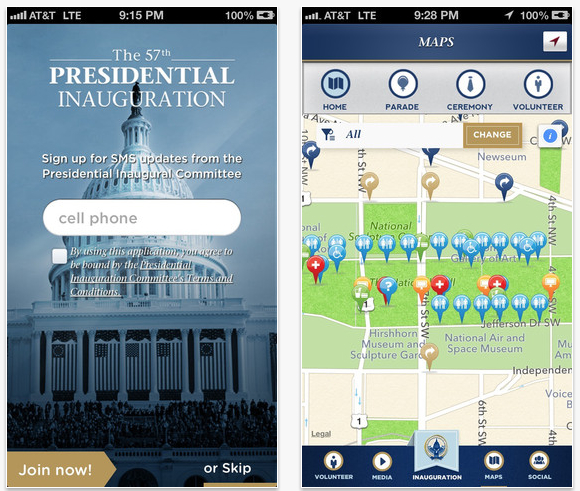 President Barack Obama will be sworn into office next Monday in a historic inauguration, capping a week of festivities organized under the theme “Faith in America’s Future.”

But what’s an inauguration these days without some smartphone apps? Sure, iOS and Android weren’t around in the time of Lincoln and Kennedy, but this is a new era.

And now, thanks in part to the work of Seattle startup Taqtile, those heading to the festivities in Washington D.C. (or even watching from afar) won’t miss a moment of the 57th Presidential Inauguration.

From parades to galas to the swearing-in ceremony, there’s plenty to keep track of during the week of festivities. 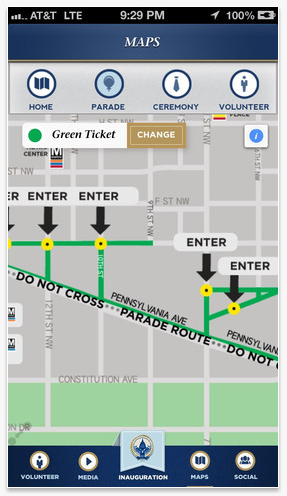 Taqtile’s Dirck Schou, whose company previously worked on the apps for the Democratic National Convention, said they were introduced to the Presidential Inauguration Committee via AT&T.

AT&T’s Advanced Mobility Application Practice contacted Taqtile for development work since they’ve worked together in the past on projects for NBC, Stanford University, Dollar General and others. Schou said that the Taqtile mobility platform is designed to allow groups to build highly customizable apps, sometimes in very short time periods.

Once Obama won re-election, the PIC moved quickly to commission the Inaugural 2013 app, and it made sense for them to work with AT&T and Taqtile, as we were already deeply familiar with the content, and they knew that our platform would allow us to turn the app around in short order,” said Schou, adding that the entire process took about four weeks from kickoff to app store submission.

Among Schou’s favorite features are the mobile maps, which he said are built to work with and without a data connection so that people can still find their way around the National Mall or other venues.

For those not able to attend the inauguration in person, Schou said that the live streaming function will likely be the biggest draw. The app also features volunteer opportunities for January 19th — the National Day of Service.

“This feature will help users locate relevant events nation-wide based on their interests, and provides anyone the ability to find a way to give back,” he said.

Schou said he’s not sure yet if Taqtile will be sending someone to D.C. next week for the inauguration, but he said they are excited to be involved in such a high-profile project.

(Check out the iOS app here and the Android app here).