The social media giant posted Q3 non-diluted earnings per share of $1.09, up 92 percent from last year, and revenue of $7 billion, up 56 percent, marking the first time Facebook exceeded $7 billion in revenue. Net income came in at $2.4 billion, up 166 percent from the year-ago quarter.

“We had another good quarter,” Facebook CEO Mark Zuckerberg said in a statement. “We’re making progress putting video first across our apps and executing our 10 year technology roadmap.”

Shares stayed relatively flat in after-hours trading. Update: Shares are now down 7 percent following the company’s earnings call, possibly because Facebook warned that revenue growth could potentially slow next year with decreased ads in news feeds and investments in other areas.

Facebook’s sustained growth is somewhat remarkable, as the company has now exceeded earnings expectations in 17 of its 18 reports since going public in 2012. It is also the fourth straight quarter of Facebook growing revenue by more than 50 percent year-over-year. 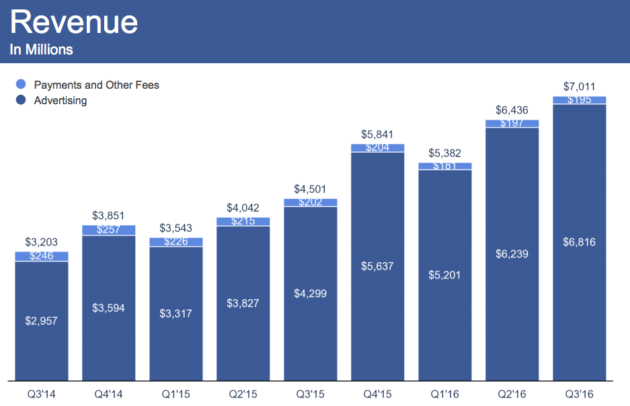 The user growth “defies the usual trajectories for social media companies,” as The New York Times reported. Facebook was once compared to Twitter, but it now has 6X the user base as Twitter. Snapchat, which some say threatens Facebook’s business, has around 150 million daily users. 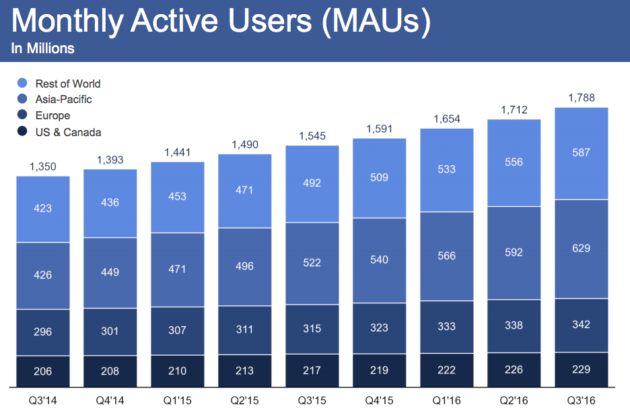 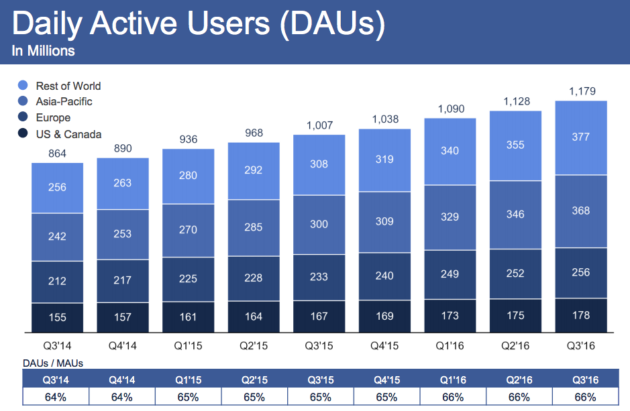 Facebook’s mobile business is on fire. It has 1.66 billion monthly active users on mobile, up 20 percent, and 1.09 billion daily active users, up 22 percent, marking the first time Facebook has eclipsed the 1 billion DAU mark for mobile.

It was another busy quarter for Facebook. The company launched Marketplace, a peer-to-peer local sales that will compete with Craigslist and OfferUp; it also added encryption to Messenger. Facebook has also come under fire for its self-serve advertising site, which allows people to include or exclude people based on race, gender, and sexual preference. There are also issues with Facebook’s editorial decisions related to what “trending” news its users see.

Facebook’s stock is up 23 percent in the past year. Here’s a look at its stock since going public: 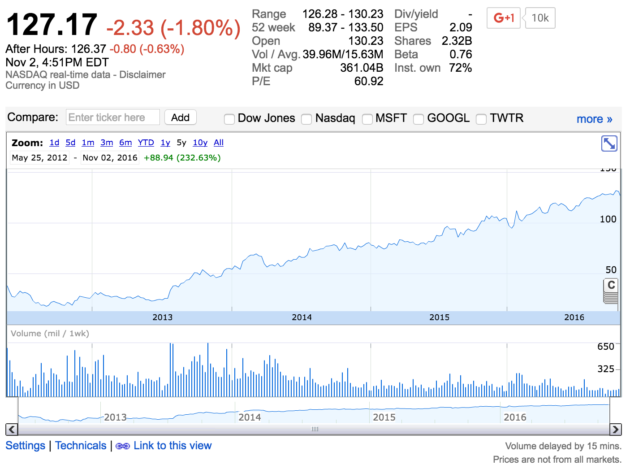