If you wanted to make a chunk of change selling “Make America Great Again” hats and didn’t think they’d do particularly well among Hispanics and bisexuals, Facebook’s advertising portal would allow you to exclude those groups.

When creating an ad, businesses can choose to include or exclude races that fall under the “Ethnic Affinities” tab. They can also exclude people based on their gender and sexual preference.

Employment and housing ads that discriminate based on these factors violate federal law.

Facebook’s policies forbid discrimination and moderators review ads before publishing them on the social network to ensure they comply with the rules.

But ProPublica says its housing ad excluding African Americans, Asian Americans, and Hispanics was approved within 15 minutes, suggesting that some illegal ads are slipping through the cracks.

Facebook, on the other hand, says the ProPublica article is deceptive. A representative from the social network claims the screenshot below is the actual ad created by ProPublica. It promotes an event, not housing.

GeekWire went through the steps to create an employment ad excluding African Americans, Hispanics, and people who are romantically interested in both men and women. The screenshot below shows the demographics that can be included or excluded in an ad. We did not publish the ad for Facebook’s review. 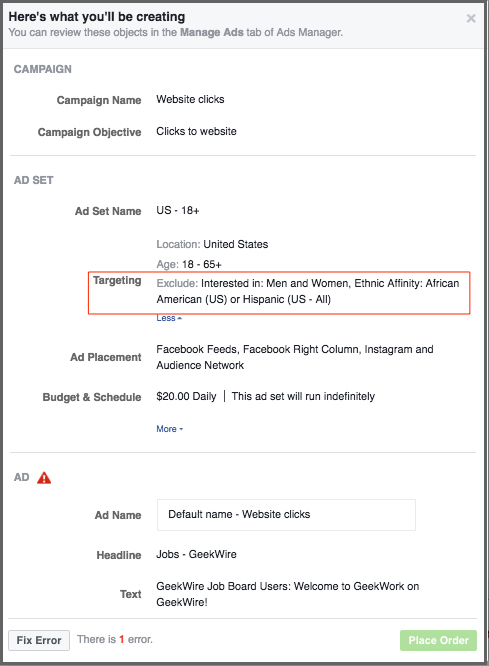 Facebook says its “Ethnic Affinity” categories are not tied directly to race. The site doesn’t ask users to report their ethnicity. The “Ethnic Affinity” designation is a guess based on a user’s engagement on the site.

It’s similar to the way Facebook tries to predict users’ political preferences so that advertisers can target them.

Facebook calls targeting to these groups “Multicultural Marketing,” a strategy that allows advertisers to reach groups with interests related to specific ethnic communities.

“Marketers use this type of targeting to assess whether ads resonate more with certain audiences vs. others,” said a Facebook spokesperson. “For example, some audiences might click on Spanish-language ads for a World Cup sponsorship vs. other audiences might click more on the same ads in English, so the sponsor might run one campaign in English that excludes the Hispanic affinity group to see how well the campaign performs against running that ad campaign in Spanish. This is a common practice in the industry.”

Facebook plans to move “Ethnic Affinity” out of the “Demographics” category on the targeting menu advertisers see, according to ProPublica.

The ProPublica report joins a chorus of voices asking Facebook to behave more like what it has come to be: The world’s most influential online publisher.

ProPublica compares Facebook’s advertising policies with those of the The New York Times, a news media company that goes to great lengths to ensure none of its ads are discriminatory.

Earlier this month, The Atlantic published an article criticizing Facebook for its silence on investor Peter Thiel’s crusade against Gawker Media.

For the time being, Facebook isn’t changing its ad targeting policies.

“We are committed to providing people with quality ad experiences, which includes helping people see messages that are both relevant to the cultural communities they are interested in and have content that reflects or represents their communities — not just generic content that’s targeted to mass audiences,” a spokesperson said.