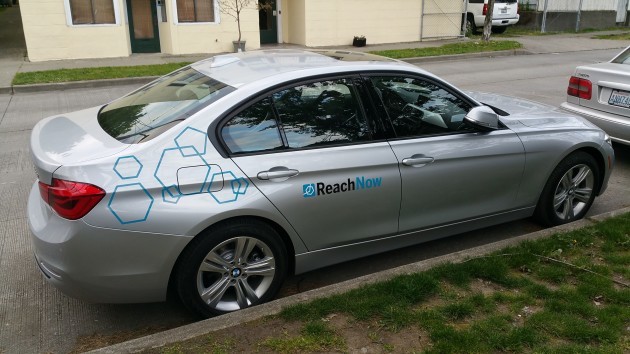 Seattleites will have yet another mode of transportation available starting early next month.

Uber and Lyft also now have a new competitor.

BMW’s ReachNow service today made several announcements — including its Brooklyn launch — but perhaps most notable is the new Uber competitor that lets people hail a ride with the press of a button.

Starting Dec. 8, BMW will launch a pilot program in Seattle called “Ride,” which lets customers hail rides from within the existing ReachNow app. This confirms early signs of the service reported by GeekWire two weeks ago. 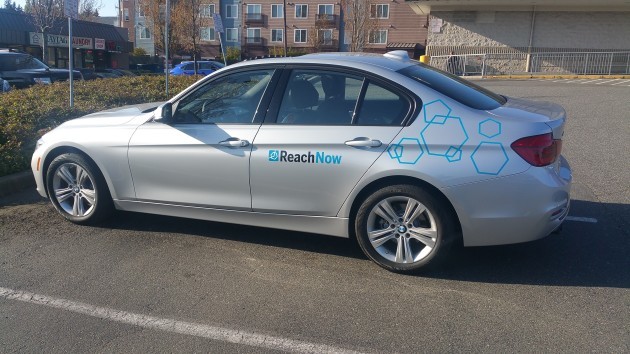 It also isn’t totally unexpected, as BMW board member Peter Schwarzenbauer teased the new feature seven months ago at the ReachNow launch event in Seattle. At the time, he said that the chauffeur service would offer a more “premium experience” than Uber or Lyft with vehicles that BMW owns, versus personal cars driven by Uber and Lyft drivers.

“We think this is a completely different level of quality,” Schwarzenbauer said.

ReachNow is a free-floating car-sharing service that made its worldwide debut in Seattle this past May. It lets anyone rent one of 520 vehicles — a mix of BMW 328xi Series sedans, MINI Cooper/Countryman, and the all-electric BMW i3 — and get from Point A to Point B within a “Home Area” that encompasses much of Seattle proper. You use a physical card or the mobile app to lock/unlock vehicles; you can park in any city-approved spot for free; and you pay a $0.49 per-minute fee (it’s currently $0.41 per minute during what seems to be an everlasting promotion).

BMW will use its existing 328xi luxury sedans for Ride, which will operate under the same regulatory framework that all Transportation Network Companies — TNCs — like Uber and Lyft must follow. The City of Seattle established those laws in 2014 for companies like Uber and Lyft that allow everyday people to use their own vehicle to offer rides to customers.

However, becoming a driver for BMW’s Ride service seems more difficult than signing up to drive for Uber or Lyft. In an interview with GeekWire, ReachNow CEO Steve Banfield said BMW is currently recruiting a small number of drivers with a “strict vetting process.”

“We want more than just a clean driving record, as we seek drivers who will deliver the exceptional customer attention too often missing from other services,” Banfield said.

That means you can’t just jump in a ReachNow vehicle and start driving other people around; you’ll need a TNC permit like those who drive for Uber and Lyft, but also pass BMW’s extra tests.

Banfield said both the Ride driver and passenger will be covered by BMW’s current level of insurance already offered to ReachNow users. There are also no plans to implement surge pricing.

Given the early popularity of ReachNow in Seattle, the new Ride service could convince some people to switch from using Uber and Lyft — if they can afford it.

Prices have yet to be announced, but you can expect something more expensive than Uber and Lyft, which charge around $1.35 per mile, $0.20 per minute, and $3.00 in fees. It will likely line up more with Uber’s own premium offering, UberBlack.

Banfield said “our goal is not to be the cheapest solution.”

“We are trying to create a premium experience and we are doing it with the existing ReachNow fleet,” he added.

Part of that premium experience will be the ability to personalize your vehicle with temperature and music preferences, as well as a “do not disturb” option for those that don’t want to talk to their driver. Those features will come later, BMW said.

You’ll also be able to schedule rides in advance — Uber and Lyft rolled out something similar this past summer; Wingz, another ride-hailing service operating in Seattle, does the same — and request a specific driver. Riders can be dropped off only within Seattle city limits for the pilot program, but BMW is exploring potential expansion.

There will also be a loyalty program to earn ride credits. Uber tested something similar earlier this year.

Banfield said Ride is all about offering customers more mobility options via the ReachNow app.

“The idea is that you have one account, one app, and you can look and see a car near you and drive yourself, just like normal,” he explained. “Or maybe there aren’t any cars nearby; or it’s late and you don’t want to drive; or you need to make a phone call. If you’d rather be driven, you can hit a button in the same app and a driver will arrive and take you where you’d like to go.”

It’s also about BMW being more efficient with its existing fleet that is already being used by people in Seattle, Portland, and now Brooklyn to drive themselves from Point A to Point B. For example, BMW can see which vehicles are being underutilized, and assign Ride drivers to those cars.

There are 520 total ReachNow vehicles in Seattle, which includes the MINI Cooper/Countryman and the all-electric BMW i3, in addition to the 328xi sedans. BMW could add another 230 vehicles to its current fleet, based on legislation the city approved in 2015 that enabled ReachNow to launch its original service in Seattle.

It’s not yet clear how the revenue from each ride will be shared with drivers. Uber and Lyft typically take around 25 percent, though that number is debatable. 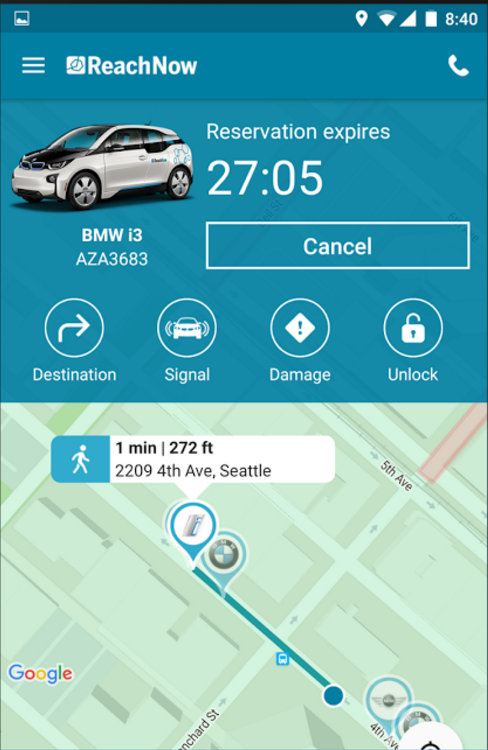 In Brooklyn, BMW will launch ReachNow with 250 vehicles and also open its first east coast office there. The Brooklyn “Home Area” spans north to Greenpoint and Williamsburg, south to Sunset Park, and east to include portions of Borough Park, Crown Heights, Bedford-Stuyvesant, and Bushwick.

BMW’s plan is to launch in an additional seven North American metros.

“There are lots of cities on the east coast we are looking at,” Banfield said. “It’s never a question of if we want to go to a certain city; it’s really a question of when.”

In Brooklyn, BMW will test another new mobility service, Fleet Solutions, which places dedicated i3 and 328xi vehicles that will remain on-site at select apartment and condominium buildings, starting with The Solaire in Manhattan’s Battery Park City neighborhood on Dec. 8.

The company also said today that there are 32,000 members across Seattle and Portland, where ReachNow just launched in September. The previous number BMW reported was 13,000 members, a milestone it reached just one month after launching in Seattle.

There have been 1.2 million miles driven by members since the April launch in Seattle.

“That is a super number for us,” Banfield said.

Another new service will be piloted in Seattle starting Dec. 15: “Share.” This will allow owners of 2016 or 2017 MINI vehicles to rent out their vehicles on the ReachNow platform for a minimum of two days. It’s a way for MINI owners to make money off their car, while also expanding the ReachNow fleet.

Finally, BMW will test “Reserve,” which builds upon ReachNow’s new long-term rates that offer lower prices for those who keep vehicles longer. Starting in early 2016, customers in Seattle using a car for two to five days can now schedule their vehicle to be dropped off at a specific time and location.

ReachNow employs 40 people — up from 20 in April — at its North American HQ in Seattle. The plan is to reach close to 60 employees by the end of December, Banfield said.

ReachNow, which partners with a Bay Area startup called RideCell to help power its back-end infrastructure, has also added other services since its launch, like the airport service it launched in August, and the new long-term rates.

For Uber, meanwhile, Seattle has always been a key market since it launched here in 2011. The ride-hailing giant, valued at more than $60 billion, often uses the city as a testbed for new products and also has a large engineering center in Seattle with more than 100 employees.

Lyft, which launched its car-hailing services in Seattle three years ago, also has an engineering office in the city.