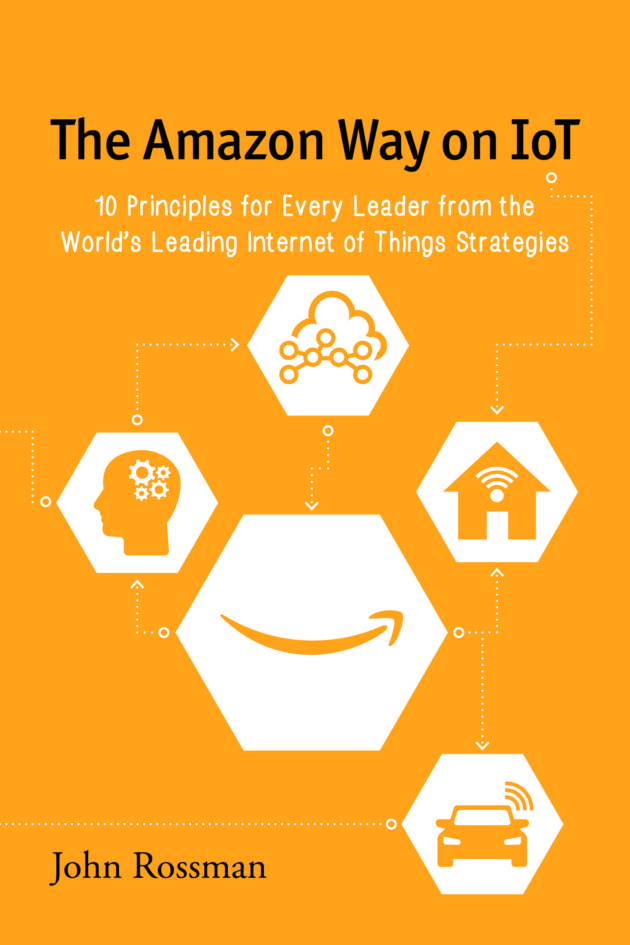 Combine a hot technology and the world’s largest online retailer into a single book title and you’ve got a pretty appealing volume. Or so hope author John Rossman and Seattle-area publisher Clyde Hill Publishing, who tomorrow will officially debut “The Amazon Way on IoT: 10 Principles for Every Leader from the World’s Leading Internet of Things Strategies.”

Rossman, a former Bellevue, Wash., resident who now lives in southern California, spent four years at Amazon, from early 2002 through late 2005. First he launched and built up the third-party sellers’ marketplace. After that he ran the enterprise services business, which handled other large retailers’ e-commerce operations. Now he’s taken his knowledge of the company’s operations and mixed it with observations about the Internet of Things (IoT) to provide principles to guide businesses.

His 158-page book, available in paperback, a Kindle eBook or an audiobook, is a sequel to “The Amazon Way: 14 Leadership Principles Behind the World’s Most Disruptive Company.” That book, published in May 2016, has sold more than 50,000 copies and in June went into its second edition.

Rossman spent a few minutes last week telling us about his latest work. The interview has been edited for style and clarity.

Q: What led you to write this book?

Rossman: For the past 11 years I’ve been a partner for consultancy Alvarez & Marsal. Talking to clients and doing research, I realized there was a lot being written about IoT but nothing targeting a businessperson trying to figure out how to use it in business, in a simple way that explained the technology, the rationales and the models you need to think through.

I know Amazon is leading the way in every one of those ideas, I’m an authentic Amazon interpreter, and I thought, “There’s a great story here.” My goal was to tell a simple story, to give the business user a framework to think through how IoT can affect their business. I tell it through the lens of Amazon and some other leading companies.

Rossman: It’s for leaders, not necessarily in the C-suite, at midsize to large companies that want to know how either how IoT can affect their business or how they can become tool providers selling IoT-related offerings.

Rossman: It was a great and demanding place to work, and we were able to get some amazing things done. The reason I wrote about the Amazon leadership principles is that they were real. We used them in everyday decisions and in everyday meetings. When I was there, they hadn’t been codified, but you still saw them in play.

Q: I get the “Amazon Way” part of the title, because you were there and it’s a follow-on to your first book. But why IoT? Why not something Amazon is famous for, like its sorting and shipping operation?

Rossman: The impact IoT will have on business and society is progressing extremely fast. It is the biggest thing out there, in terms of technology. It will lead to the next wave of automation, efficiency and new customer experiences. IoT’s promise is that things that seem magic today will be just everyday occurrences, and you won’t know how you ever lived without them. Take the voice interface. It’s going to be commonplace in 10 years. One of the biggest challenges is going to be how to do operating partnerships, like the one among Amazon, DHL and Audi. A lot of companies are going to need to build new skills in those areas.

Q: Is IoT something every business needs to think about, or is it more appropriate for some than others? For example, service providers versus goods manufacturers.

Rossman: Every business needs to think it through. A big part of the opportunity is in every-day operational improvement — making your processes more streamlined, shortening cycle times, decreasing costs, improving quality. The biggest challenge in process improvement is first getting data and then making improvements based on that data. IoT can take operational improvement to a whole new level in terms of collecting data and making real-time adjustments. And that’s a play for every company out there.

Q: What sort of timeframe is realistic for companies to implement IoT processes and strategies?

Rossman: It’s a journey, and it could completely change an organization’s trajectory. Don’t wait until it’s mission critical. And don’t think of it as a one-and-done thing. Amazon makes lots of small bets, where many companies think of things as investments rather than bets. One nice thing about IoT is that its costs (of IoT as a service, from Amazon Web Services and other cloud providers) have come way down, so companies can trial things a lot more easily.

Q: Let’s zoom out a bit. Do you see AWS’s huge lead in the cloud as unassailable?

Rossman: I doubt anyone sees it as unassailable. Other companies have assets that make them viable. But the pace at which AWS adds new features and the scale of what they’re doing is very exciting. They’re making IoT easier for people to access. That’s core plumbing that’s really hard for developers to do, but Amazon is making it pretty easy for everyone to have those capabilities.

Q: How about Azure, and IBM’s Watson? Is there a leader emerging in terms of IoT as a service?

Rossman: I haven’t studied them all. You need to do due diligence on where each provider is and where they’re going. For example, Microsoft is centering on hybrid cloud. Depending on your situation, that could be an important consideration.

Q: What has to happen for you to think of this book as a success?

Rossman: I don’t even think about how many units it might sell. I think about whether it will change someone’s thinking and perspective. The best part of doing the first book is that I get emails every week saying, “That book has changed my view of how I lead my team and what I can do.”