Transportation startups like UberX, Lyft, and Sidecar will finally be able to legally operate in Seattle.

Monday’s vote ends a 15-month process that saw the city originally approve laws in March that placed a cap on the TNCs. However, the original ordinance was suspended in April thanks to a coalition group — one that has received more than $1 million from Uber and Lyft — which forced Mayor Ed Murray to bring together stakeholders from all involved parties to work on a new deal.

After nearly two months of discussions, an agreement was reached in June that removed a 150-vehicle cap for each company, established revised TNC insurance requirements, gave more rights to for-hire companies, set a 10-cent surcharge on each ride to fund wheelchair-accessible taxis, and added 200 taxi licenses over the next four years.

With the addition of amendments that were passed today — except amendments “J,” and “K,” — the new agreement is essentially what will become law in Seattle.

“I’m excited that once again, Seattle is taking the lead to show how we can adjust to the very rapidly-changing world of technology,” Murray told GeekWire.

Murray noted that Seattle isn’t a city where you can always walk on the street and find a cab.

“This is a city where folks want options other than to drive their own car,” Murray said. “By increasing the number of for-hire vehicles — whether it’s a taxi or TNC — it’s a win for Seattle.”

The only “no,” vote on Monday came from councilmember Mike O’Brien, who several times voiced concern that the city needed more time to establish regulation for the TNCs.

“We have a number of amendments before us today and what’s become apparent to me in the past couple weeks is that this bill is a very complex piece of legislation with lots of policy implications that we have not have the chance to properly vet internally and publicly to understand implications,” O’Brien said.

To start the council meeting, O’Brien sponsored a motion to push the proposed ordinance back to the Taxi and For-Hire Committee for further analysis. However, that failed 7-2. 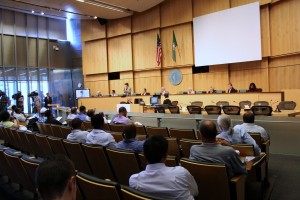 Then O’Brien introduced amendment “J,” which would have required the TNCs to provide exclusive insurance coverage at all times while a driver is active on the app. He expressed worry with the potential “gap” — when TNC drivers are logged into their apps, but not picking up or dropping off a passenger.

O’Brien, who said he had a letter from insurance experts that supported his amendment, alluded to the six-year-old who was killed last year by an Uber driver in San Francisco and noted that he didn’t want to have the same problem occur in Seattle.

“I’m not against innovation, and I’m excited about the product that the TNCs are bringing and excited about the competition that’s going to happen,” O’Brien said. “But I want to make sure that the public is not at risk while we figure out how this works.”

Sally Clark, a councilmember who headed up the Taxi and For-Hire Committee — which O’Brien also sat on — said she appreciated O’Brien’s concern. But Clark also noted how the TNCs agreed to up their insurance standards during the mayor’s negotiation process for that “gap” to meet minimum commercial insurance requirements that the state requires.

The amendment was voted down 5-4, with Clark, Sally Bagshaw, Jean Godden, Tom Rasmussen and Tim Burgess all voting “no.”

“There will never be a time when anyone has less than $300,000 of insurance coverage,” Steger said. “That is what the city and state dictate as necessary.”

Cyrus Habib, a Democrat who represents the 48th District and sits on the state’s transportation committee, was at the meeting and spoke during the public comment portion. Habib, who has convened a stakeholder group to address the issue of commercial insurance for TNC drivers at the state level, urged the council to pass the legislation without making changes to the insurance requirements.

“If the council would have done something today on the insurance other than what is already in the ordinance, it would have jeopardized a good faith process that will lead us to a state fix,” Habib told GeekWire. “It would have also created a false sense of security in the public because insurance is a state law issue.”

Mayor Murray now has 30 days to sign the new legislation and enact it into law. You can read more about what’s happened in the last 15 months from our report from earlier today, or check out what happened during today’s meeting with our live blog from City Hall.

Finally, here’s a statement from Lyft on today’s decision:

Seattle has long been a leader in embracing innovative technology, and today’s vote to authorize ridesharing recognizes that regulations can be modernized to allow new industries to thrive while maintaining the highest level of public safety. We’d like to thank the Council and Mayor Murray for supporting a solution that preserves modern, affordable, and convenient transportation options for residents across the city.

The progress made today truly belongs to the tens of thousands of Lyft Seattle community members who have spoken up over the past few months in support of ridesharing; sharing their stories, enthusiasm, and belief in a transportation movement built by Seattle residents for Seattle residents. The passage of today’s ordinance is an important milestone for the ridesharing movement and we are excited to see the Lyft community in Seattle grow and thrive for years to come.