One Washington state politician thinks Seattle is making a mistake with its plan to place caps on app-based transportation startups, and plans to introduce his own statewide legislation to regulate these companies.

Cyrus Habib, a Democrat who represents the 48th district and sits on the state’s transportation committee, told GeekWire that he agrees these startups should be regulated with rules like mandated commercial insurance policies, background checks and driver training requirements to ensure passenger safety.

But as far as limits go, he does not agree with what the city is doing.

“Artificially capping rideshares serves absolutely no public interest,” he said. “It simply replicates the scarcity found in the traditional taxicab industry, which frustrates each and every one of us who has waited out in the rain for that ever elusive taxi.”

His comments come as the Seattle City Council prepares to enact regulations that will limit, to 150, the number of drivers that companies like UberX, SideCar and Lyft can have on the road at any given time. [UPDATE: The scheduled vote has been postponed a week, to March 17, because a councilmember will be out of town and unable to participate.]

Here’s what Habib proposes: Abandon caps for both taxis and companies like Lyft, which would initiate a “race to the top.” He’s also in favor of easing regulatory mandates on traditional taxis, like fixed meter rates, to level the playing field for all.

“Then consumers could choose, and players in all facets of this industry could benefit,” Habib explained. “Think about it: When has capping supply ever made sense? How absurd would it be if the Seattle City Council were to calculate dining demand and then only issue a fixed number of restaurant licenses? Caps are simply the wrong approach.”

Habib added that he hopes Seattle considers a policy approach that “promotes healthy and vibrant competition.”

“The techniques these ridesharing apps are pioneering, such as real-time accountability and smartphone GPS-tracking, are already beginning to take hold in the traditional taxicab industry,” he said. “That sort of innovation should certainly be encouraged in any new policy changes the city adopts.” 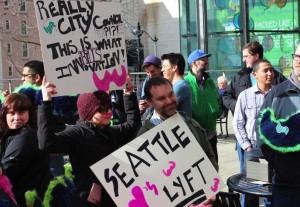 Habib, who has been legally blind since age 8 and was the first Iranian-American elected to state office in the U.S., noted that there are many ways to both allow ride-sharing companies to exist freely and also help cab drivers compete more effectively. For example, one of his recently-passed bills helps cab drivers reduce insurance costs.

“Let’s help our traditional cab drivers by addressing their actual needs, rather than turning our backs on the future,” he said. “As urban residents increasingly adopt car-less and ‘car-light’ lifestyles, there is more opportunity than ever for drivers to earn a living wage. Meanwhile, consumers, including those like myself who are unable to drive, receive better service, more choices, and lower prices.”

As far as the state’s involvement in all of this, Washington is taking somewhat of a wait-and-see approach with Seattle’s pilot program. While the state could technically impose laws that override anything Seattle has in place — similar to what the state of California is doing — Habib doesn’t think Washington would do something like that.

“The purpose here is to address state issues, such as the intersection between personal and commercial liability insurance, which cities are not in a position to do,” he said. “The City of Seattle is a key partner and will be at the table as we examine these issues.”

For now, legislators in Olympia will begin conversations with stakeholders to examine topics such as insurance, licensure and other issues. Habib said he plans on introducing legislation on this issue in the 2015 session and hopes to have addressed most of the challenges facing all stakeholders by mid-2015.

“There is a win-win to be had here,” Habib said. “The only question is: Are we ready to seize the opportunity?”