Amazon CEO Jeff Bezos sold off another 1 million shares of company stock last week, valued at $756.74 million, according to a regulatory filing.

In the last three months, Bezos has unloaded $1.4 billion in Amazon stock. In May, Bezos sold more than 1 million shares of company stock worth a total of $671.29 million. The average stock price in last week’s deal was 13 percent higher than when Bezos sold off shares in May.

The filing notes that the sale was made pursuant to a Rule 10b5-1 trading plan, which allows company insiders to sell a predetermined amount of stock at a set time, to avoid the appearance of insider trading.

Amazon has turned in several strong quarters in a row, beating Wall Street expectations and raising its stock price more than 45 percent over the last year. Amazon recently surged ahead of Exxon Mobil to become the fourth most valuable company in the U.S. by market cap.

Bezos recently passed Warren Buffett for third on Forbes’ list of the wealthiest people in the world. With a net worth of $66.1 billion, Bezos trails only Microsoft co-founder Bill Gates ($78.5 billion) and Zara co-founder Amancio Ortega ($75.5 billion) on the list.

In terms of the value of the stock, the sale represents the largest amount ever sold by Bezos, thanks to the higher share price. Bezos has sold off Amazon stock several times in recent years, including a $534 million deal in August 2015 for more than 1 million shares. He sold a similar amount in February 2014, but back then it was only worth $351 million. He sold 2 million shares in May 2010, but that deal was only worth $265 million. Bezos still owns more than 80.9 million Amazon shares, regulatory records show. 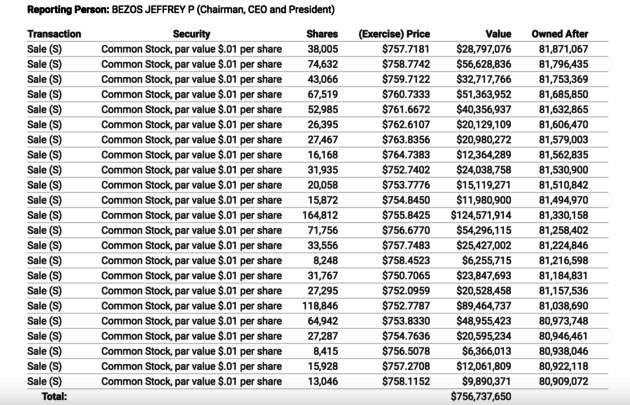