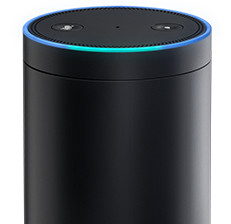 Spotify users that pay for a $10 per month premium account can now listen to their music through the Amazon Echo.

Amazon announced today that its virtual assistant will now officially play tunes from Spotify premium accounts — “Alexa, play (artist or playlist or song) from Spotify” is the voice command that will activate the new feature. Those that use Spotify’s free, ad-supported product are out of luck.

There was a way to do this previously, but it was a bit cumbersome as the process required a separate device and a Bluetooth connection. Now, though, Spotify joins iHeartRadio, Pandora, TuneIn and Amazon’s own music services that can play tunes directly through the Echo itself.

This is yet another added capability to Amazon’s $180 cylindrical virtual assistant. Just this week the company announced the ability to order Domino’s pizza from the device, which can also provide information from Wikipedia and the web, tell you the weather, set timers and alarms, read news, record shopping/to-do lists, provide sports updates and scores, and much more. The e-commerce giant has been heavily promoting its smart speaker as of late in a series of Super Bowl ads, leading up to the big game on Sunday.