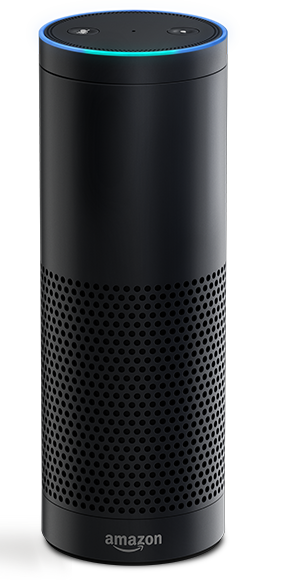 Amazon just added a pair of new features to its Echo intelligent talking speaker, providing voice controls for three third-party music services, and making it possible to get the device’s “Alexa” digital persona to repeat what the user says.

The new voice controls for Spotify, Pandora and iTunes still require the user to pair a phone or tablet to the Echo to access the music services. (Echo connects directly to iHeartRadio, TuneIn and its own Amazon Music services, without using another device.)

Here’s the message Amazon sent to Echo users about the software update.

We hope you’re enjoying Echo. We’re working hard to add many of the features you’ve asked for, and we would like to update you on two new features.

Voice control for Spotify, iTunes, and Pandora: You can now enjoy hands-free voice control for these popular music services. To get started, simply connect your phone or tablet to Echo by saying “Alexa, pair my device.” After you start playing your music, you can easily control it by saying the wake word and: play, pause, stop, next, or previous.

Simon Says: You’ve likely heard some of Echo’s jokes—now there’s another way to have fun with Echo. You can get Echo to repeat whatever you have in mind by starting with “Alexa, Simon says…” Here’s a fun tip: you can covertly use the remote control from another room to get Echo to repeat what you say and surprise your family.

In addition to these new features, we’ve made numerous improvements based on your feedback. We have increased response speed and accuracy for many of your questions, expanded coverage of facts from Wikipedia, and added new spelling words and definitions. The companion app is now available on iOS and Android 5.0+, and you can now use the app to bulk delete items from your to-do and shopping lists. And we are just getting started.

Thanks for your feedback so far, it’s been immensely helpful. Keep sharing your thoughts on what else we can do to make Echo even better—you can always provide feedback through the Echo app.

GeekWire columnist Frank Catalano is testing the new features and will have more in a follow-up post. He confirms that the new Bluetooth music control features do not work with Rhapsody, so they are specific to the three services Amazon named.

He’s also having fun with the Simon Says feature — getting Alexa to say, for example, “I am Jeff Bezos.”

The updates follow through on Amazon’s promise to make regular improvements to the Echo experience. The device ($99 for Prime members, and $199 for others) still requires an invite to purchase, but Amazon earlier this month noticeably increased the number of invitations going out to customers.

Also be sure to catch Alexa’s appearance as a special guest on this recent episode of the GeekWire radio show.