There are some traditional ways to market your startup, but traveling around the country with your family in a Volkswagen camper van to 30 different Major League Baseball stadiums is certainly not one of them.

But that’s exactly what Joel Carben will do this summer, taking his wife and two young daughters on a 3-month trip that will double as a grassroots effort to help drum up attention for his Seattle-based startup.

Carben is CEO and co-founder of IdealSeat, a company that originally created an app that showed baseball fans where to sit for the best chance at catching a foul ball.

It’s been quite the past few years for Carben, who not only launched a startup but has gone through a personal transformation of sorts that included a battle with substance abuse.

“I had a lot of problems with addiction and with self-confidence for the past 25 years,” Carben said. “There were a couple things that happened in my life and I just said, ‘what are you doing?’ A lot of people had my back and I broke through some pretty bad life-long patterns.”

Carben said his summer trip, which kicks off at Safeco Field in Seattle today, is like a full-circle realization both of the dark places he once was and the opportunities his life now offers.

“In many ways, the trip is an evolution of that awareness and an opportunity to thank all those who supported me along the way, most importantly my wife and two daughters,” he said.

The trip is part of a contest that IdealSeat is putting on to help spread the word for its new app that will award anyone who catches a foul ball or home run in a seat that was purchased on the app with season tickets for a year. However, the contest is only good for specific games — games that Carben and his family will be attending throughout the summer, along with IdealSeat employees.

Carben says he hopes to sign up thousands of users while traveling to different ballparks and also close a second round of financing in between games.

“The purpose of the trip is two-fold,” he explained. “First, we are keen to validate our data, technology and business model. We will arrive two hours early to each stadium, sit in each of our recommended sections, and then have a chance for fans to meet the team 30 minutes before the game. Second, we are in the process of raising our second round and will be meeting with investors in the Bay, Los Angeles, and New York City. We are excited to build our network and leverage our already-strong brand.”

IdealSeat has shifted its business a bit from what was a data collection platform to what is now a mobile app that helps fans buy tickets based on what experience they’re looking to have at the ballpark. 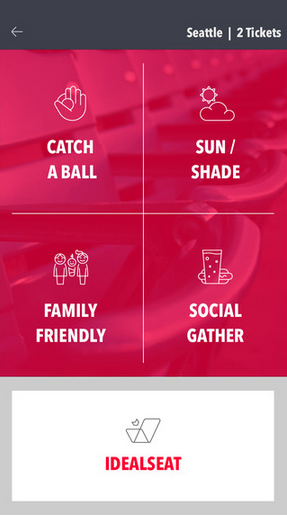 The 10-person company this week announced a new partnership with Ticket Evolution and released an updated app that lets fans choose seats based on its data that shows where the best place is for sitting in the shade, proximity to concessions, family friendly sections, and more.

IdealSeat also unveiled a new membership program. Those who pay $49.95 for an IdealSeat membership will be able to buy tickets without paying fees. Carben compared the membership to that of ClassPass or Jukely.

“We’ve created the first loyalty system in ticketing and removed all ticketing fees from the game though our exclusive membership,” Carben explained. “We find you the best seats and the best deals and know that sports fans are ready for better pricing.”

There are a certainly competitors in the sports ticketing space, from incumbents like Ticketmaster and Stubhub, to new startups like ReplyBuy and Gametime. But Carben said that IdealSeat separates itself by not charging ticketing fees and focusing on the fan game-day experience.

“Eventually Ticketmaster and StubHub will have to make some moves, and we like our chances and positioning to really compete with the other new competitors,” Carben said. “We think we have a pretty awesome differentiator.”