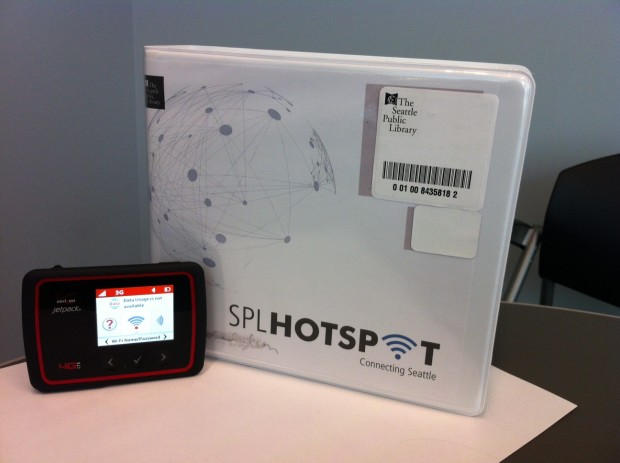 As a way to help expand access to broadband Internet, Seattle Public Library branches will now offer lendable mobile hotspots thanks to grants from Google and Google.org.

Seattle Mayor Ed Murray announced today that library cardholders will be able to check out hotspots just like they loan out books or movies.

Patrons can borrow one of 150 devices, which are powered by Verizon’s network and last 20 hours on one charge, for up to three weeks at a time. They can renew if no one else has a hold. The hotspots can also be delievered.

In a statement, Murray said that the program will “help bridge the digital divide” and “is a sign that broadband access is not a luxury but a necessity to be successful in today’s world.”

Providing more equal Internet access was a topic last week at the Seattle City Council Energy Committee Meeting, when a new advocacy group Upgrade Seattle encouraged the city to build its own municipal broadband network, in part as a way to offer Internet to all citizens.

Glaser noted that 20 percent of Seattle residents do not have access to Internet. The city today said that more than 90,000 Seattleites lack a connection at home.

The Seattle Public Library has made an effort to innovate with technology in recent years. In February, it won a Knight Foundation grant to develop an online, librarian-led referral service to help patrons improve their skills.

Update, May 19: Initial demand is high for the hotspots, which had 81 checkouts within the first hour of a press event Monday, and more than 175 holds by the end of the day.

Google confirmed that the grant is worth $225,000, which also covers digital literacy trainings for the library and the opportunity to check out laptops starting this summer.