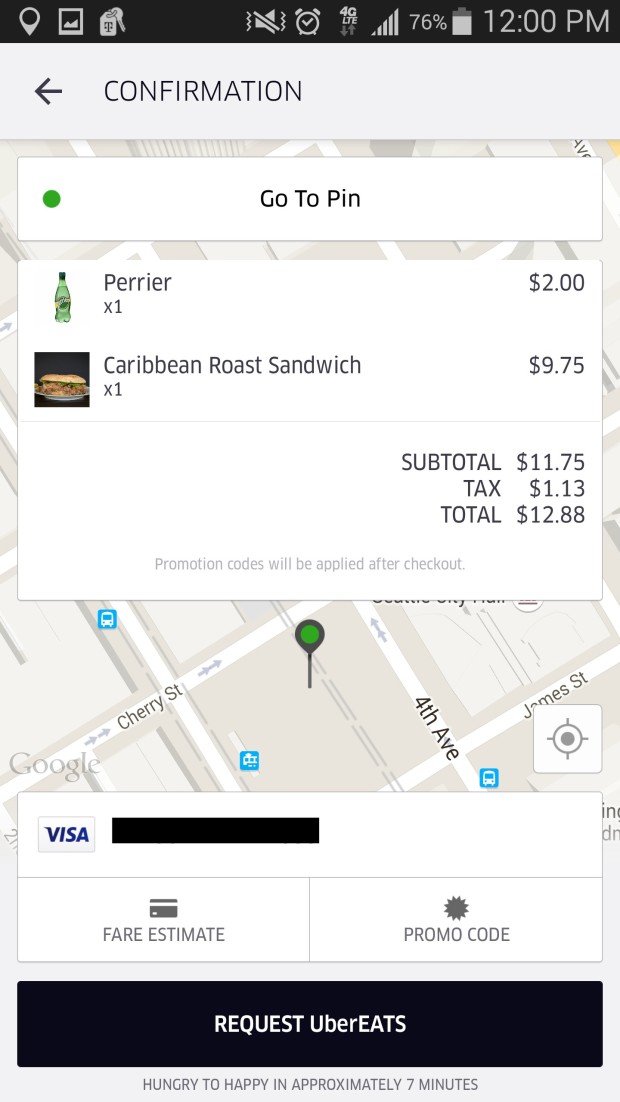 Demand for Uber’s new food delivery service was “off the charts” in Seattle today, causing a few hiccups and leaving some customers disappointed and hungry on Wednesday afternoon.

The ride-hailing company debuted UberEATS on Wednesday in Seattle, marking the 10th city where Uber now delivers food in addition to its transportation service.

I was downtown after checking out the Seattle Police Department’s new high-tech real-time crime center and decided to test Uber’s food service. After logging into the app, picking a Caribbean Roast Sandwich from Paseo and a Perrier bottle of water, I requested the order. My mouth began watering at the thought of Paseo’s arriving in less than 10 minutes, which is Uber’s maximum guaranteed delivery time.

But that’s where my trouble started, as the app seemed stuck on “requesting” a driver. It did this for more than a minute — being accustomed to getting a response within seconds for a normal Uber ride, this was a bit frustrating. I restarted the app and entered my order in once again but ran into the same problem.

Here was Uber’s response to my complaint:

@Taylor_Soper Hey Taylor! Thanks for your patience! Demand is much higher than we ever expected. Working on getting more cars out there. ?

After ten minutes, I drove over to Belltown hoping that a new location would make a difference. I went through the same process and requested the order. Yet again, the “requesting” bar bounced back and forth for a few minutes. I canceled the order, tried re-submitting it a few more times, but no luck.

Others seemed to have similar problems.

Tried @UberEats today and order did not go through. What gives? #UberEATS #officelunch #fail

@UberSEA Is the UberEATs just kidding? I requested several times bu it stuck there for requesting for several minutes and then failed.

I ended up driving to our office in Fremont — where UberEATS is not yet delivering to — and was forced to walk to the Mexican restaurant across the street to buy lunch like a normal person since Uber let me down. Tough times, I know.

In a statement, an Uber spokesperson told me that “demand for UberEATS on our first day is off the charts and higher than we could have anticipated. To make sure everyone can get fresh, delicious dishes tomorrow, we are increasing our supply going forward to find the right equilibrium.”

You would think that Uber was prepared with an army of drivers ready to respond to multiple requests around town for lunch — particularly on launch day — but that didn’t seem to be the case.

However, Uber did sell a majority of its inventory within about two hours.

YOWZA! Y’all love your Paseo. The sandwich is sold out but make sure to check out the @MonsoonSeattle chicken and the @volunteerpark salad!

And those that were lucky enough to have lunch delivered seemed pretty happy:

Just got #UberEATS in #seattle and it was great. Paseo sandwich while hanging out at cafe vita. Thanks @Uber

We’ll try testing out UberEATS tomorrow, which will feature a new menu that includes a “BBQ Pulled Pork Sammy with Fried Corn on the Cob” from Skillet, a “Meatball Gnocchi” from Gnocchi Bar, and a “Lemongrass Basil and Peanut Salad” from Bounty Kitchen.

In the meantime, check out our story from earlier Wednesday that details Uber’s strategy for delivering lunch in a crowded space that includes several competitors in the Seattle region.