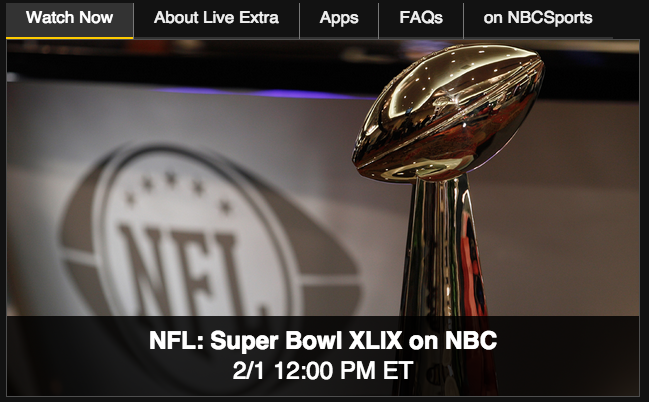 If you don’t have a cable subscription or can’t get to a bar on Super Bowl Sunday, no worries — NBC has your back.

The cable giant announced today that it will stream Super Bowl 49 online for free at NBC Sports Live Extra. Yes, that means no log-in screen and no authentication credentials required to watch the big game this year — just an Internet connection is all you need.

NBC will live stream 11 hours of Super Bowl content, from the pre-game coverage, to Katy Perry’s halftime show, and of course the Seahawks vs. Patriots game itself. You can tune in starting at 9 a.m. PT on Feb. 1. NBC will also stream an episode of The Blacklist after the game.

NBC said it will stream Super Bowl content on desktop and tablets both online and via its mobile app (iOS, Android, Windows Phone). However, due to Verizon’s exclusive smartphone contract with the NFL, you won’t be able to watch the stream from your phone.

If you’re a Verizon “More Everything” customer, you can stream the Super Bowl from your phone without paying a $5 per month fee that was removed this year. Verizon is also developing a special Super Bowl Stadium Stadium app for people at the game.

NBC noted that it is unlocking this special programming to promote the “TV Everywhere” campaign.

“‘Super Stream Sunday’ builds off of NBCUniversal’s commitment to create broader TV Everywhere opportunities for our consumers,” NBCUniversal executive Alison Moore said in a statement. “We are leveraging the massive digital reach of the Super Bowl to help raise overall awareness of TV Everywhere by allowing consumers to explore our vast TVE offering with this special one-day-only access.”

Variety reports that NBC is selling digital-only ads for the game that will only be broadcasted via the online stream.

This isn’t the first time NBC has live-streamed the Super Bowl, as it did so back in 2012 (but only the game — no halftime show). NBC also streamed the Seahawks vs. Packers game this past September for free. In addition, the company live-streamed its Olympics coverage in both 2012 and 2014.

Last year, FOX broadcasted the Super Bowl online to anyone — not just cable subscribers — and set a record for the most-watched live-streamed sports event in history with an average of 528,000 viewers. The year prior, CBS also streamed the big game for free.