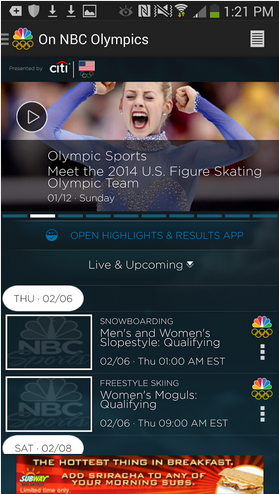 Coverage of the 2014 Winter Olympics kick off tonight and there are a few options to watch all the action for those that won’t be sitting in front of a TV.

Much like it did with the 2012 Summer Olympics, NBC will stream every single event (except for the Opening Ceremony) online for free — kind of. Viewers accessing content on NBCOlympics.com or the NBC Sports Live app (iOS, Android, Windows) can stream events, but only if they have cable or satellite subscription with one of NBC’s participating partners (Xfinity, Time Warner Cable, Direct TV, Dish, Verizon FIOS, COX, Charter, AT&T U-verse, Optimum, Suddenlink, Mediacom, Cable One, WoW!, Brighthouse, and RCN, among others).

This is strategy differs from FOX, which allowed anyone to stream the Super Bowl for free online.

If you don’t have a cable subscription with one of NBC’s partners, there are a few options. NBC is giving out one-time 30-minute temporary passes to anyone without a subscription. Once you’ve used up the 30-minute pass, you can access the live stream for five minutes per day after that.

Forbes notes a few other alternatives. BBC is streaming 650 hours of content and CBC is also streaming live competition as well. However, only those with IP addresses in the U.K. and Canada will be able to access those channels online. Users elsewhere can try to use a VPN to make their address, Forbes notes.

You can also access 185 hours of programming on NBC’s broadcast network —  total NBC coverage will surpass 1,000 hours — with a digital antenna.