The Seattle Sounders FC has consistently been one of the most dominant MLS soccer squads in its six years of existence. While the team has yet to win an MLS Cup, it has qualified for the playoffs every season and had the best regular season record in 2014 — all while playing the most games out of any team in the league since 2009.

Part of that success is arguably due to the team’s advanced use of analytics. At an SLU Chamber luncheon event on Wednesday, Sounders Sporting Director Chris Henderson offered a behind-the-scenes look at how the team closely tracks player performance during games, practices, and even sleep.

“We monitor players with everything they do — which they don’t like very often — but it’s the way we can optimize their performance, keep them healthy, and not get anyone injured,” Henderson said.

He added that the club focuses on three aspects of analytics: descriptive, predictive, and prescriptive.

“Most teams don’t get past descriptive,” he said. “We want to get at prescriptive — the what, when, and why it happened.”

Henderson, an 11-year MLS veteran who joined the Sounders front office seven years ago, explained which wearable devices the team uses to monitor its players:

In five minutes, this device can measure cardiac, metabolic and central nervous system readiness. The Sounders use this to analyze residual fatigue and overall readiness of each player before a game.

The Omegawave software also gives recommendations to help achieve normal readiness levels, like taking cold showers, getting a massage, or changing a diet. 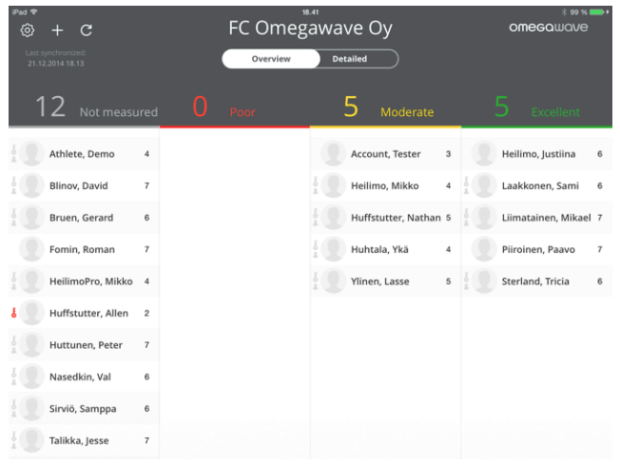 The technology and data can also help calculate the probability of injury, Henderson said. For example, if the Omegawave app shows red for the central nervous system (see below) there’s about a 25 percent greater chance a player would suffer a soft tissue muscle injury, depending on age. 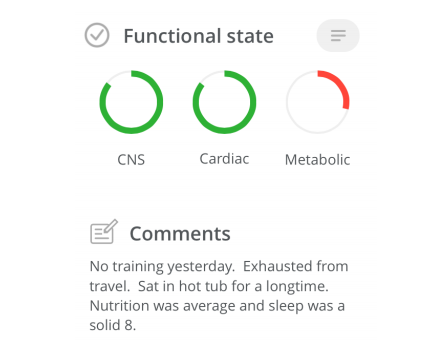 Henderson added that it took a few games to convince the coaches of the data’s legitimacy. At one point, they dismissed what the wearable data was indicating in regard to a particular player’s health.

“No, I got a feeling, I’m just going to push and play, don’t worry,” the coaches told the trainers.

But within two weeks, that same player suffered an injury that kept him out for a few games. After that, Henderson said head coach Sigi Schmid had newfound respect for the data.

The training staff uses data from the Polar device to help measure how intense a particular workout is for a particular player. This helps coaches determine if a player is working too hard or taking it easy.

“For example, if a player has a low body load (which measures a workout’s intensity) but high heart rate, we need to do extra training with those players because they aren’t working hard enough,” Henderson noted.

Worn on the back of a shirt during training, this device measures every movement to show, for example, how much a particular player is sprinting. “We pay particular attention to high intensity runs because of hamstring and soft tissue injuries,” Henderson said. 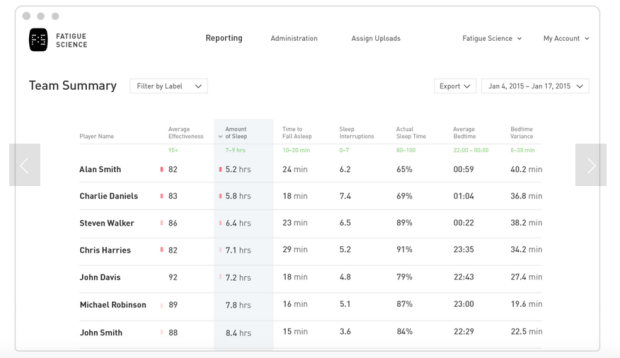 The Sounders monitor how each players sleeps with the Readiband, a company with its U.S. headquarters in Blaine, Wash. Henderson said that players who lack sleep — often those with young children — can have slower reaction times during games, sometimes to the equivalent of being drunk. “That’s what you want to avoid in games,” he said.

Aside from the wearables, each MLS stadium is equipped with motion-tracking cameras that lets teams measure how far and in what ways a player is moving around during a game. Here’s a look at each time a Sounders player touched the ball during a game last year — this helps coaches analyze whether he was playing too far from his position: 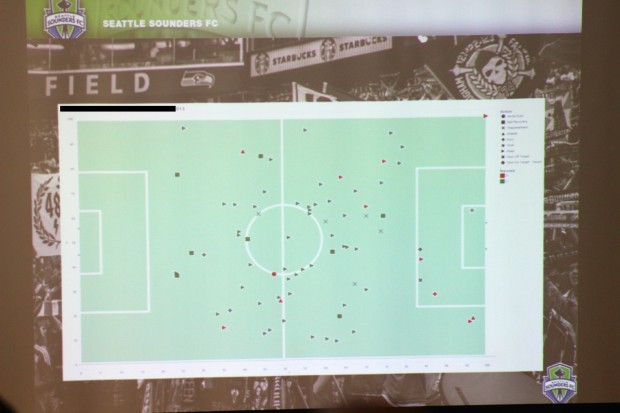 David Tenney, the team’s Sport Science and Performance Manager, told GeekWire that most of the players don’t mind the sensors. Compliance with the GPS Catapult and heart rate wristband is 98 percent; the five-minute OmegaWave sessions, however, have about a 75 percent compliance.

Tenney, who joined the Sounders in 2009, said the goal is always to use devices that are as non-invasive and easy as possible. He noted that using a wearable is much better than having to draw blood, for example.

“Everything we do is to help the athletes, and to help our coaches train the athletes in an optimized manner,” Tenney explained. “If you buy into that (and most do), then they are fine. They just get used to it. If you don’t buy into it, and you just want to take your money and go home, you are more likely to reject the sensors.” 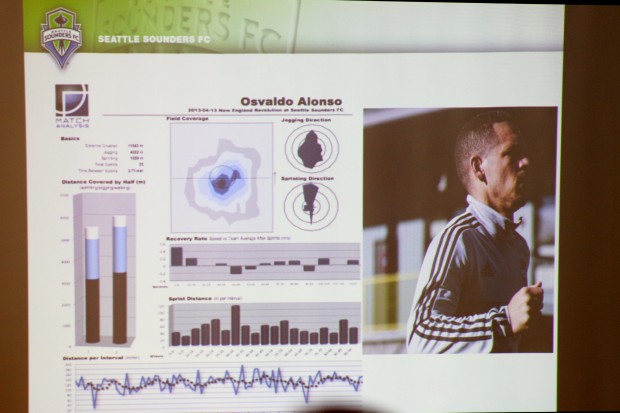 Henderson also talked about offseason workouts and said that those who are “fully compliant” with the instructions only miss a combined 18 games, on average, the following season. However, those who did not comply were held out of nearly 50 matches.

“With our salary cap restrictions, it’s very important to have our top players on the field every week,” Henderson said.

Aside from using data to improve the team’s fitness levels, the Sounders — which are hosting a Sports Science Weekend in June — also take advantage of tech tools when scouting for talent.

The team uses a web-based analytics platform called Wyscout, which has a library of games, highlights, and detailed statistics for thousands of players around the world. 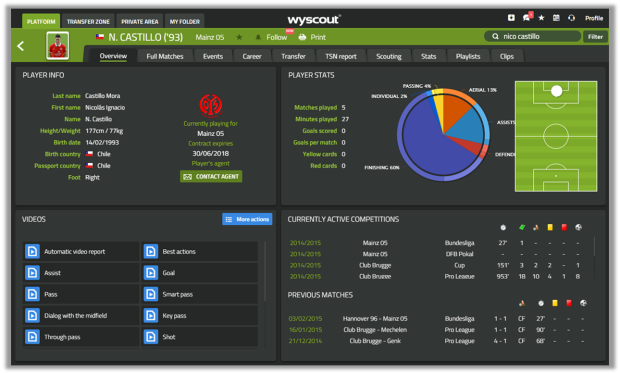 The Sounders also use another application that helps them prepare for the next opponent. One feature includes highlight clips of teams with virtual lines drawn from player-to-player that calculates the distance between each athlete in real-time.

It’s almost hard to believe that this technology was largely non-existent from the soccer field just a few years ago. Henderson, a Washington native who won championships in both the MLS and the NCAA, said one of his first professional soccer coaches would bring a 75-yard rope to practice and attach it to three or four players as a way to teach correct spacing techniques.

If you don’t buy into it, and you just want to take your money and go home, you are more likely to reject the sensors.

Today, much of the same education is done with motion trackers and video.

“My coach was way ahead of his time, but every time we saw the rope there, we knew it was going to be a long day,” Henderson noted. “Now the tools we have are so good. We can email players video clips, they can watch it home, and we can talk about it the next day.”

Wearable data and new technology aren’t the sole reason for the Sounders success. There’s a host of other variables, like front office moves, home field advantage, and the intangibles you can’t measure. But there’s no doubt that using information from wearable devices has helped the Rave Green gain an edge on its competition.