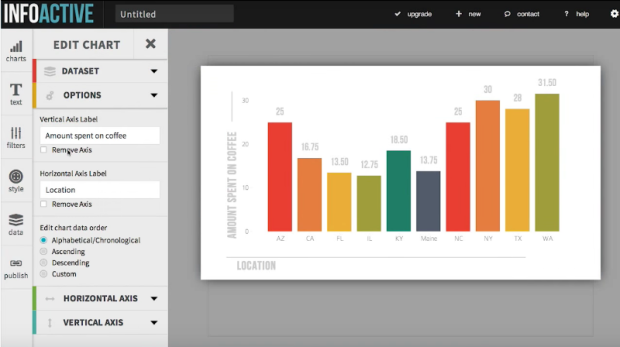 For the first time in its 13-year history, Tableau Software is acquiring another company.

The Seattle-based maker of data visualization software today announced the acquisition of Infoactive, a 3-year-old startup based out of Montreal that turns data into infographics.

Infoactive will shut down its service as a result of the deal, and its three employees will join Tableau.

“Our goal at Infoactive was to blend our passion for data and design to help people make sense of information,” Infoactive CEO Trina Chiasson said in a statement. “We’ve always admired Tableau’s mission to help people see and understand data and we’re thrilled to work together to pursue our shared vision.”

Founded by Chiasson and CTO Daniel Roberts in 2012, Infoactive won an award at SXSW in 2013 for “Best Bootstrap Company” and raised $55,109 in a successful Kickstarter campaign later that year.

“The Infoactive team will be a great addition to the Tableau family,” Dave Story, VP of Mobile and Strategic Growth at Tableau, said in a statement. “Their experience in data and design as well as building mobile and cloud sharing products will be a great asset to our development team.”

It’s been a busy past few months for Tableau, which last month announced a huge lease for a new office building in Seattle’s Fremont neighborhood, with room for as many as 1,300 employees. The company currently has 1,200 employees in the Seattle area, spread across six buildings in Fremont and one in Kirkland.

Tableau last week also reported $149.9 million in revenue for the past quarter, a 65 percent increase over the same period last year as the company added 3,000 new customers. That beat analysts expectations of $141 million, but it was a slower growth rate than the first quarter when Tableau saw revenues increase by 75 percent.

The company’s stock is down nearly 15 percent in the past month, but up about 17 percent in 2015.