Tableau continues to take over “The Center of the Universe.”

The Seattle-based maker of data visualization software today announced that it has inked an 11-year lease for 210,000 square feet in the four-story NorthEdge building, located just north of Seattle’s Gasworks Park.

It marks the latest expansion for Tableau in the Fremont neighborhood — the quirky arts community that Tableau has called home for more than 10 years and is affectionately described by locals as “The Center of the Universe.”

“Fremont has contributed greatly to Tableau’s overall culture and will continue to serve as our worldwide headquarters for years to come,” said Tableau CFO Tom Walker in a release. “This is exciting news for our current and future employees.”

The new building — located between N. 34th Street and N. Northlake Ave. — is currently under construction and will be ready for occupancy in the second half of 2016. Tableau will be the lone office tenant, offering flexibility for the company to build out the four open floor plans in a creative fashion that fits its culture.

The building will provide room for more than 1,300 employees, adding enough space to more than double the company’s workforce in the Seattle area. Tableau currently has 1,200 employees in the Seattle area, spread across six buildings in Fremont and one in Kirkland. It has not made any decisions on whether it plans to vacate existing space, though the company does have long-term leases in place for many of its properties.

In addition to the new building, Tableau said today that it signed a lease late last month to take over the entire building at 1441 N. 34th Street, where it already occupies one floor. It is also outfitting existing office spaces at 1000 N. Northlake Avenue and 701 N. 34th Street with more workspaces.

When it opens in 2016, the new NorthEdge building will be the largest in Tableau’s portfolio. The annual base rent will be $7.5 million. The company declined to say how much total square-footage it now holds in the Seattle area.

Tableau’s expansion in Fremont is yet another sign of the growing presence and influence of the tech industry in Seattle, highlighted most obviously in the South Lake Union neighborhood where dozens of construction cranes dot the landscape around Amazon.com’s headquarters. The boom — the envy of most cities — is causing growing pains related to transportation and other key infrastructure in the city.

Tableau, for its part, is working hard to be a good neighbor in one of the more eclectic Seattle neighborhoods.

Thompson said that they offer free parking on weekends for community events, and have recently partnered with the Fremont Chamber of Commerce to host regular meetings. Tableau’s new foundation also is taking a more active role in neighborhood issues.

Tableau looked at a number of options throughout the Seattle area for its real estate expansion, even for a short period considering the massive former Amgen campus on the Seattle waterfront that Expedia recently purchased for $229 million.

But Fremont has always been home for Tableau.

“Fremont is where our soul is. We love it here. We were founded here,” said Thompson. “We wanted to stay here. It was our first plan.”

The new building also allows Tableau to get a bit more creative around its workplace environment, something that is taking on added importance as the company grows. It will feature three decks and terraces with sweeping views of Lake Union and downtown Seattle, while a fourth rooftop deck area will be designated as public space. 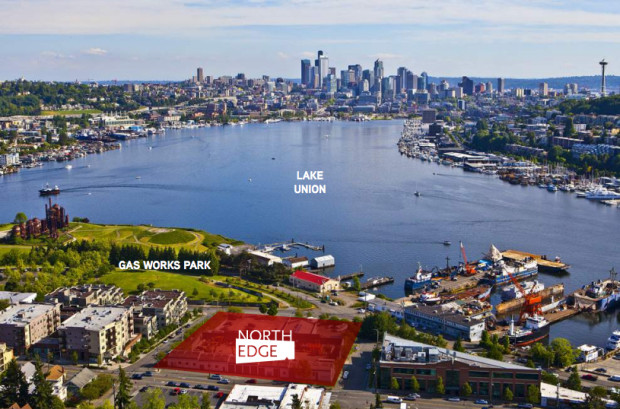 But there are a few things you won’t see given’s Tableau’s roots and culture, which has never focused on glamorous or over-the-top office space. There will be no fancy slides connecting floors.

Fremont is where our soul is. We love it here. We were founded here.

It will also lack an in-house cafeteria, part of an ongoing effort by Tableau to encourage employees to grab lunch or coffees with colleagues at nearby establishments.

Robert Hendrick, who joined Tableau in February after overseeing Amazon.com’s real estate operations in Europe, said the H-style design of the project includes an open courtyard that will help foster community.

“It is a really smartly designed building for a great workplace,” said Hendrick, adding that it is “long-term play” for the company’s growth in Fremont. The building, just west of the University of Washington along the Burke Gilman bike and walking trail, is being developed by Touchstone. 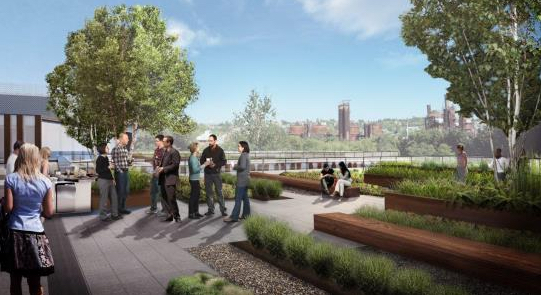 Tableau is growing fast.  Each time I’ve visited the company’s offices in recent months, it is in some phase of remodeling project. This time, it was adding a new illuminated glass wall to the lobby of the headquarters. Thompson joked that they’ve had  a number of “remodelings over remodelings.”

“Slowly, but surely, we are getting there,” he said.

During the company’s first quarter, Tableau reported a 75 percent increase in revenue as it signed up 2,600 new customers, beating Wall Street estimates handily. The stock is now trading at about $119 per share, giving it a market value of $8.2 billion.