Breaking News: Online travel giant Expedia just confirmed that it will be moving its headquarters from Bellevue to Seattle — a major regional shift and a coup for Seattle Mayor Ed Murray in his efforts to bolster the city’s economic base.

“I’m pleased to announce that Seattle is the new home to Expedia,” said Murray in a news conference at Seattle City Hall, confirming reports that surfaced Wednesday afternoon. “This is a great day for the city of Seattle.”

Expedia CEO Dara Khosrowshahi said the company will buy the campus from Amgen, which announced plans to close its Seattle complex along Elliott Bay last July. “We think it will be a magnet for top talent” — a home base “befitting a leading technology company,” he said. Khosrowshahi called it an “iconic waterfront headquarters.”

The move is slated to take place in 2018, and the company will be adding additional space to accommodate as many as 1,500 more employees, beyond its existing 3,000 in the region.

The company will be paying nearly $229 million for the campus overlooking the Seattle waterfront, north of downtown. The zoning of the property will be changed from R&D to office as part of the move.

About 75 percent of the company’s employee in the region live on the Eastside and 25 percent on the Seattle side, said Khosrowshahi. The average commute will be longer by 5 or 6 minutes, based on Expedia’s studies, he said.

“A majority of the employees are going to be somewhat negatively impacted and we’re going to work over the next couple of years to mitigate that,” he said.

It will take 18 to 24 months to get the space into shape for Expedia, executives said, requiring a “significant investment” beyond the purchase price of the property.

Khosrowshahi said the new location will appeal to technology talent, and the company wanted to own its property, not lease it. The company wasn’t able to find a similar situation in Bellevue.

“The Seattle address was definitely a positive,” he said.

Murray said he has been in communication with Bellevue leaders and is committed to working together on the regional economy. In general, Murray said, “I don’t think this is an either-or situation.” 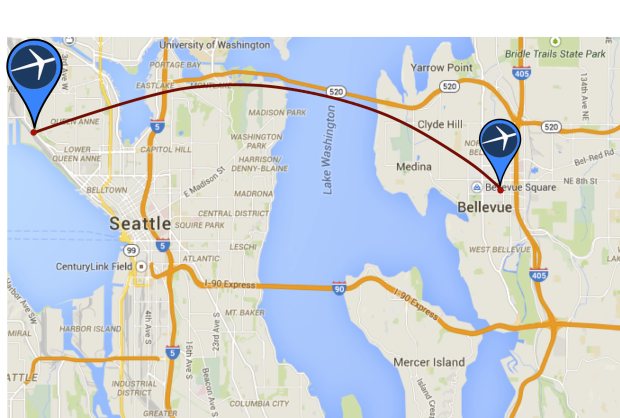 In a statement, Bellevue City Manager Brad Miyake said that “we see this as a real estate decision — pure and simple.” He noted that there just wasn’t enough space in downtown Bellevue to accommodate Expedia’s growth.

“Expedia has been an important part of the Bellevue business community since its IPO days,” Miyake said. “While we are disappointed to see them leave, we are pleased that they will continue to remain in the Puget Sound region, contributing to our growing economy and providing good jobs to our talented workforce.”

It’s a big move, literally. The company, founded in the 1990s as a Microsoft spin-off, employs about 3,000 people in the Seattle region, out of approximately 15,000 people worldwide. One of the biggest challenges will be a tougher commute for many of Expedia’s employees, especially those on the Eastside.

The parking garage on the site has about 1,100 spaces.

Amgen announced last July that it would be closing the 40-acre campus as part of a broader cutback in its global workforce. The biotech giant acquired the property as part of its purchase of homegrown biotech company Immunex more than a decade ago.

Related: Lessons for Expedia: What it’s like to move an entire company to Seattle from the Eastside

Combined with the news that Weyerhaeuser will be moving its headquarters to Seattle’s Pioneer Square neighborhood, Expedia’s announcement “is yet another huge win for Seattle,” said commercial real estate veteran Kip Spencer, one of the original founders of officespace.com, who was involved in the original site search for Immunex, which led to the eventual assembly of land at Pier 89.

“The Amgen Campus has been a bit of a black eye for the city and the Port of Seattle considering all the incentives originally granted to Immunex,” Spencer said. “You couldn’t script a better outcome for this project.”

Spencer said the expansion potential at the waterfront site makes sense for Expedia.

It’s the latest in a series of major moves by Expedia. The company recently acquired Travelocity for $280 million and announced plans to buy Orbitz for $1.6 billion, in addition to a $270 million minority investment in Decolar.com, the Latin American online travel giant.