City officials in Seattle and Bellevue were careful to speak nicely about one another today as online travel giant Expedia announced plans to relocate by 2018 from Bellevue to the former Amgen property on the Seattle waterfront. Seattle Mayor Ed Murray said the larger question of Seattle vs. Bellevue isn’t “an either-or situation,” and Bellevue City Manager Brad Miyake described Expedia’s move as “a real estate decision — pure and simple.”

But the decision nonetheless puts a spotlight on the differences between the cities.

Expedia’s decision was multifaceted, with many issues to consider, but Expedia CEO Dara Khosrowshahi acknowledged that the preferences of technology employees played a role.

“Bellevue was a great home for us, as well, but Seattle is a place where a lot of technology talent wants to live, so the Seattle address was certainly a positive,” he said, responding questions from reporters today during a news conference announcing the planned move.

The specific property also was a big factor in this situation.

The Eastside is home to giant technology companies, including Microsoft, the company from which Expedia spun off in the 1990s. And traditionally the Eastside has been the place where technology companies have built large corporate campuses. But in this case, Expedia found its preferred campus environment in the picturesque former Amgen campus on the Seattle waterfront.

“The outdoors is part of what makes Seattle great,” Khosrowshahi said. “The floor spaces in this campus are much broader, so it allows for a pretty open environment, with lots of people in an open space, and we think that is the kind of environment that employees like — technology employees especially. So we think that environment is going to be super attractive.”

He said it wasn’t an “anti-Bellevue” decision. However, the chance to buy a 40-acre campus on the waterfront was unique to Seattle. 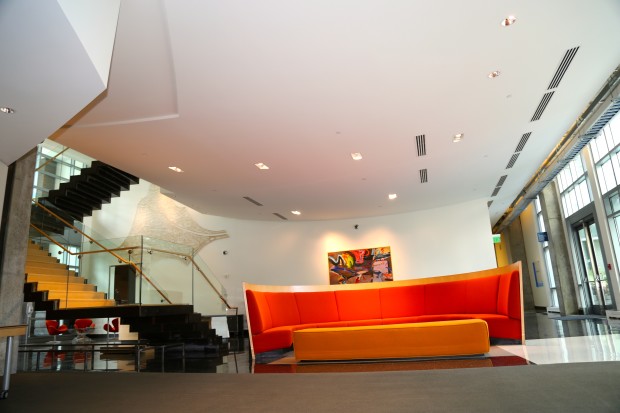 “It gives us ample opportunity for expansion, and for us to really make our mark,”Khosrowshahi said. “We’re able to own it, we’re not just leasing it. We’re able to create an environment that is about Expedia, that befits our culture. We just weren’t able to find that in Bellevue.”

The company will buy the campus for $228.9 million from Amgen in a deal expected to close in the second quarter of this year. Expedia has 3,000 employees in the region, and it expects to add another 1,500 people who will be located on its new Seattle campus.

About 75 percent of the company’s employees live on the Eastside and 25 percent on the Seattle side, said Khosrowshahi. The average employee commute will be longer by 5 or 6 minutes, based on Expedia’s studies, he said.

Expedia joins companies including Amazon and Facebook that are expanding their operations in Seattle, driven largely by the region’s pool of engineering talent.

RELATED: Lessons for Expedia: What it’s like to move an entire company to Seattle from the Eastside