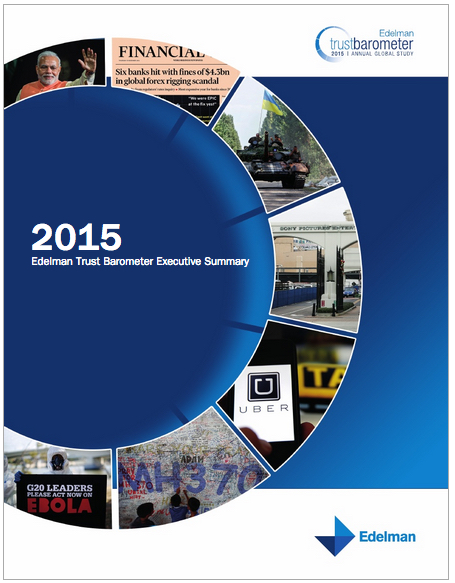 Talk to any entrepreneur or technology executive, and you’ll hear stories about how technology is changing the world for the better. But not everyone feels that way.

And who is the most distrustful of the pace of change?

According to the 2015 Edelman Trust Barometer — an annual study that measures trust across government and business — it is women.

“Women, in our study, are substantially more skeptical about innovation. Substantially,” said Edelman president and CEO Richard Edelman. “Twenty points more skeptical. Why? Because they are the protectors of the family. The guys are like: ‘whoa, just another gadget, let’s roll.’ No. What are the consequences to society?”

In his opening remarks, Edelman took issue with a quote from Jeff Bezos in which the Amazon.com founder noted that new inventions and advances in technology usually benefit society.

There are side-effects to innovation, and companies need to pay attention to this. Many times, entrepreneurs are so headlong focused on the business mission ahead that they pay no attention to the collateral damage or issues that are related to their innovation.

“Not so fast Jeff,” said Edelman. “There are side-effects to innovation, and companies need to pay attention to this. Many times, entrepreneurs are so headlong focused on the business mission ahead that they pay no attention to the collateral damage or issues that are related to their innovation.”

For example, there are issues around privacy and security, as well as genetically-altered foods and fracking. In all of the countries where Edelman conducted the survey, respondents said that innovation is happening too fast.

“Only 20 percent actually trust government to regulate that change,” said Edelman. “And yet, by a five to one margin, they want more government regulation. So, they are incompetent, but geez, we sure need them.”

Edelman said it is not enough for companies to just innovate, noting that businesses must aim to build trust in the inventions they create.

“You can’t just discover something and introduce it,” he said. “You have got to create a context for acceptance of that innovation. It has to be around a societal benefit, and engagement with

According to the study, there was an evaporation of trust across all institutions: government, business, media and non-governmental organizations. This marks the first time in the study’s 15-year history that trust has eroded across those four areas.

“It used to be that you had exchanges of trust across institutions — like a see-saw. One would be up, one would be down,” said Edelman. “What we now see is the evaporation of trust in institutions.”

In 2014, Edelman said that there was the “perfect storm” that eroded trust, driven by incidents such as the hacking of Sony, foreign exchange trading scandals and the outbreak of ebola.