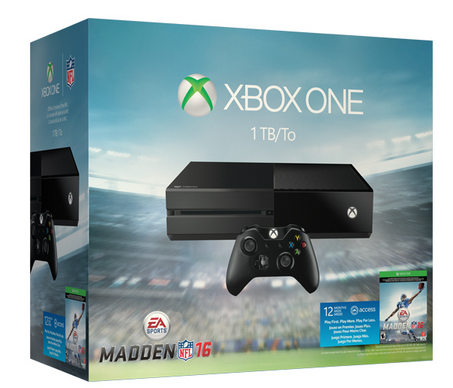 If you haven’t yet upgraded to a PlayStation 4 or Xbox One and love playing Madden, now is not a bad time to buy.

Microsoft last week unveiled its Madden NFL 16 bundle, which includes a 1TB Xbox One, a headset, and a year-long subscription to EA Access (retails at $29 per month) all for $399. It’s similar to other bundles that include games like FIFA 16 and Forza Motorsport 6.

That’s not a bad deal and you basically get Madden for free, since the 1TB Xbox One retails at $399 on its own. Microsoft offered the same deal last year, but with the 500 GB Xbox One instead.

Sony has been much less aggressive with the bundle deals, but a NeoGAF user posted a GameSpot ad that shows a week-long Madden bundle deal for the PS4 at $399 available this week. The PS4 retails at $399 itself, so you’re getting Madden for free. We’ve reached out to Sony to confirm the deal. (Update: GameStop has a $399 bundle deal on its website that includes a PS4, Madden NFL 16, and a Madden NFL 16 guide) (Update 2: Amazon is selling its own bundle deal for $399).

Though the company has offered fewer bundle deals, Sony last month did note “overwhelming popularity” for its Batman: Arkham Knight PS4 bundle, which includes the new Batman game and retails for $399 (same cost as a PS4 alone).

As Jeff Grubb over at VentureBeat notes today, there are a bevy of bundles now available to gamers less than two years after Sony and Microsoft debuted their consoles, with many including what’s essentially a free, newly-released game. This is helping both companies sell more consoles, as Grubb reported NPD data that showed 82 percent of overall console sales including a bundle in June.

Speaking of Madden, Uber ran a promotional campaign today that offered up free copies of Madden NFL 16 to riders via its app — and some deliveries were done by players (or ex-players) themselves.

If your waiting on your @Uber_SEA you never know who will show up with a Xbox and #newmadden16 ? pic.twitter.com/SsRYF81Zoj