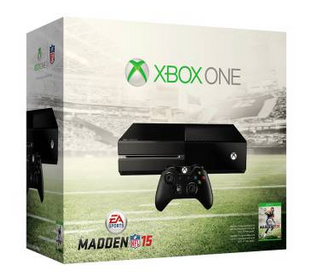 If you’re a fan of EA Sports’ Madden NFL franchise and still have yet to purchase a next-generation console, Microsoft wants your attention.

The company today announced a new $399 Kinect-less Xbox One bundle that includes a copy of Madden NFL 15, which features Seahawks star Richard Sherman on the cover, for free. You can pre-order the bundle here and receive it by Madden NFL 15’s release date on Aug. 26.

Microsoft has offered similar bundles in the past, lumping in games like FIFA 14 and Titanfall at no additional cost. The company will also offer a Sunset Overdrive bundle later this year, which will be sold with a white Xbox One.

Today’s announcement comes after EA and Microsoft last week debuted EA Access, a new subscription service that allows Xbox One owners to play EA games like FIFA and Madden for a monthly or yearly fee.

Perhaps the new bundles will help Microsoft catch up to Sony, which is winning the next-gen console race both globally and in the U.S. The PS4 has outsold the Xbox One in the U.S. for the past six months and that includes June, despite the fact that Microsoft doubled its Xbox One sales in June after it began selling a $399 version of the Xbox One without the Kinect sensor on June 9 — a $100 price cut from the Xbox One with Kinect.