Seattle’s tech industry often gets slapped with an apathetic label when it comes to local politics.

Fast-moving tech CEOs and entrepreneurs are simply working so hard to change the world — and make a lot of money — they forget to focus on what’s happening in their own backyards. As a result, they don’t vote, nor do they get civically engaged. 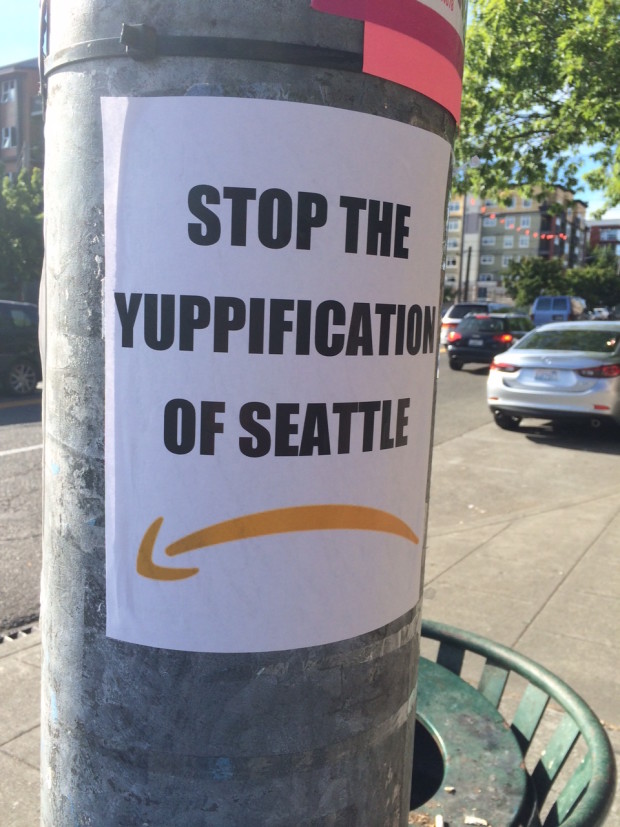 At least that’s the common refrain.

But as Seattle undergoes one of the biggest economic booms in its history — largely driven by fast-growing tech companies like Amazon.com, Tableau Software and Zillow — the tech industry is rallying to make sure that it does not get forgotten, or more importantly crucified.

There’s a real divide emerging in Seattle, highlighted by signs like this one found on a street utility pole.

Three of the most recent feature stories in the Seattle Weekly have addressed the issue of a wealthy tech industry steamrolling the city, including cover stories about the lack of diversity in tech and how some Seattleites are now moving to Bellingham to escape the city’s gridlock.

In one of the recent pieces, Gus Hartmann — a Google engineer who is running for city council but has little chance against Sally Bagshaw — bluntly addressed the issue of tech worker apathy in civic life.

“I’m going to try and coax them out, but the little fuckers don’t vote, to put it bluntly,” Hartmann told Seattle Weekly. “They are not civically engaged. They take civic responsibility lightly, and because of that they are used as scapegoats.”

They are not civically engaged. They take civic responsibility lightly, and because of that they are used as scapegoats.

Yes, Amazon.com, Google, Facebook and other tech giants are transforming Seattle in new ways, adding tons of high-paying jobs in a way that places like Cleveland or Buffalo or Pittsburgh would absolutely envy.

But the growth also is having a polarizing effect, and now some in the tech community are worried that a San Francisco-style backlash is coming. Or already here.

This view was on full display at a panel discussion I moderated last week at the Museum of History and Industry where panelists — all of whom were rooted in the tech industry — expressed concerns about housing, transportation, education and other key issues impacting Seattle.

Michael Schutzler, CEO of the Washington Technology Industry Association, said it was imperative that Seattle techies vote in the Aug. 4th primary and November general election. A lot is at stake, he said.

Perhaps most telling, when I asked a question toward the end of the panel discussion about who would step up in Seattle to lead the city into this new phase … there was a deafening silence.

Even with that lack of hope, tech industry executives and venture capitalists are getting more engaged, including a group affiliated with the Seattle Metropolitan Chamber of Commerce’s The Civic Alliance for a Sound Economy.

Depending on the outcome, we’ll either have a council that will actively try to punish the tech sector, or a council that can make Seattle a great example of how to grow an economy quickly and well, solving a lot of lingering societal problems in the process.

“Depending on the outcome, we’ll either have a council that will actively try to punish the tech sector, or a council that can make Seattle a great example of how to grow an economy quickly and well, solving a lot of lingering societal problems in the process,” they write.

Redman, who along with Alberg sits on the finance committee for the Civic Alliance for a Sound Economy, tells GeekWire that there’s “a lot at stake” in the upcoming elections, one of the reasons she felt it necessary to get engaged.

“Bigger picture, we want to invite others to get involved in the civic life of the city and to encourage their employees to do so too—now and for the long haul,” she said.

Here’s the full letter the group is sending out to tech leaders today:

As we all know, Seattle is going through an unprecedented period of growth and change, and the tech sector is the leading driver of that transformation. Seattle is also in danger of becoming increasingly polarized politically just when we most need to pull together to address the city’s opportunities and challenges effectively for the benefit of all.

Over the last month, our candidate evaluation committee sifted through over 344 pages of questionnaire answers and interviewed 29 candidates from all seven district races and both at-large races, totaling over 14 hours of conversations with candidates.

The upcoming city council elections (where, because of the new districts, almost every race is up for grabs and many new candidates have surfaced) are a pivotal moment for Seattle.

Depending on the outcome, we’ll either have a council that will actively try to punish the tech sector, or a council that can make Seattle a great example of how to grow an economy quickly and well, solving a lot of lingering societal problems in the process.

The issues are big, complex and directly impact our ability to found, finance and grow our companies by attracting as well as retaining talent and competing with the rest of the world. They also deeply affect the health and sustainability of the city we all love and want to our kids to love.

Our pitch to you is that the tech sector can and should take an active leadership role in the political life of the city just as it has taken a leading economic role. We are reaching out to you as a key leader in the tech community to join us in this effort, starting with the city council elections. Your contribution can take many forms— and our ask is for you to do so in one or more of these ways:

(1) Please consider contributing to a PAC that we’re all contributing to in order to ensure strong candidates make it through this historically large primary election by following this link.

Our endorsed candidates include:

(2) Making it extra easy for your employees to register and to vote, via King County Elections Online.

Can you please let us know if you can sign up to one or more of these by replying to this email? Say the word and we’ll make it happen!

If you’d like to get involved in helping us lead this effort, or know anyone else who would — please call or email any one of us. To read more about CASE and its mission, visit the website here.