A new startup in Seattle wants to be the Google or Microsoft of a new industry called scientific wellness, and now it has some serious cash to do so.

Co-founded by renowned genetics pioneer Dr. Lee Hood, Arivale today announced that it raised a $36 million Series B round led by Arch Venture Partners and Polaris Partners, with participation from Maveron. Total funding for the company, which publicly launched last month in Seattle, now stands at almost $40 million.

As we detailed in June, Arivale plans to blend comprehensive, cutting-edge genetic analysis with personal coaching — giving participants specific ways to take action to improve their overall health, meet their personal goals and minimize their long-term risk of disease.

The 19-person startup has spent the past year working with Hood’s Institute for Systems Biology to pilot a scientific wellness program with a group of 107 people — the “pioneers,” as the company calls them — who gave blood, urine and saliva samples at quarterly intervals, used fitness trackers, and talked regularly with a dietician who served as their coach, helping them understand their genetic tests and identify specific actions to take.

“I think many came in quite skeptical of whether it would really do anything,” Hood told GeekWire on Monday. “But almost everyone said that this, in one way or another, had really transformed their own personal health objectives.”

Hood has started his fair share of successful biotech companies, including the likes of Amgen, Applied Biosystems, Rosetta, and about a dozen others.

But he said he’s never had an easier time raising money for a company than with Arivale. In fact, Hood said the potential success for the company is “unlimited.”

“Virtually everyone in Silicon Valley and Seattle recognize that this is a really big, encompassing idea,” he said. “Frankly, I think this company could be larger and more transformational than any I’ve been associated with in the past.”

While there are other companies launching in this new wellness industry, Arivale CEO and co-founder Clayton Lewis said that his company has a series of differentiators, from the way it understands your genome sequence to how it regularly conducts tests — blood, saliva, urine, gut microbiome — to measure change over time.

“We start with a wellness focus as opposed to giving you a set of data,” Lewis said. “We focus on how we help optimize current health and how to avoid disease.”

Perhaps even more important are Arivale’s personal coaches, who help Arivale participants take concrete steps based on their test results and goals.

“It’s our secret sauce,” Lewis said. “They take this very complex data set with the support of a physician and scientists, come up with three or four actionable recommendations, and then help you succeed in achieving those recommendations.” 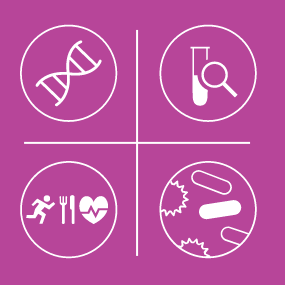 The founders said they couldn’t envision Arivale launching even two or three years ago. But now people are paying more attention to wellness and prevention as healthcare costs are being transferred back to consumers.

“Interest in staying healthy is accelerating,” Lewis noted. “We also see that people tend to be unsatisfied with solutions brought to market today.”

At the outset, Arivale will charge $2,000 per year for each participant, but Hood said he expects the cost of the required testing to come down over time as economies of scale kick in. For example, he thinks that within eight years, it will cost 10 times less to map a human genome than it does today.

“It’s when and how those declines in cost will come,” Hood added. “I’m quite confident that over this period, there will be striking decreases.”

Arivale plans to launch in San Francisco this fall and will expand across the country next year. Three days after Arivale’s launch event in Seattle last month, the company had 140 people wanting to sign up to join the program. Now, it has more than 1,000.

“One of the most exciting things about this company is the idea that it is the opening shot in creating a whole new industry of scientific wellness,” Hood said.

Money from the $36 million Series B round will be used to recruit new users, pay for clinical tests, and bring on up to 30 employees by the end of 2015.

“They have enormous expertise in a whole variety of areas,” Hood said of the board. “They are going to help Arivale invent the future of wellness.”