The last time the Seattle City Council implemented a law that Uber didn’t like — a cap on the number of drivers who could work at any given time — the ride-hailing giant showed up to council meetings to voice concerns, amped up its marketing engine, and gathered thousands of petition signatures from Seattle residents. Uber eventually got its way, as lawmakers removed the cap.

Fast forward 18 months later with another law that could impact Uber’s business model even more so, and the $62 billion company isn’t making quite as much noise — its customers included.

However, a lawsuit seems likely.

This past Monday, the council voted 8-0 to pass legislation that gives Uber, Lyft, taxi and other “for-hire” drivers the right to unionize — the first such law in the nation. It was a historic vote, and if implemented, would give drivers the ability to negotiate pay rates and employment conditions. Currently, these drivers are considered independent contractors and are not protected by traditional labor standards — including Seattle’s new $15 per hour minimum wage law.

Councilmember Mike O’Brien, who first introduced the legislation back in September, told GeekWire this morning that he’s received several emails from Uber riders — not just drivers — thanking him for pushing forward with the legislation because they want to see drivers treated more fairly. 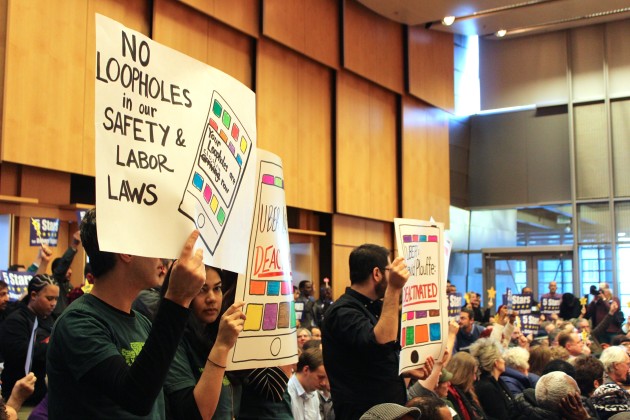 “The people who use the platform are either indifferent or support this type of legislation,” O’Brien said.

Though Uber has stayed relatively quiet about this issue — publicly, at least — most are expecting the company to sue the city on grounds that the legislation violates federal labor and antitrust laws.

“It is a virtual certainty that Uber and other rideshare companies will sue to invalidate Seattle’s new ordinance,” said Charlotte Garden, an associate law professor at Seattle University. “This is the first legislation of its kind, and so a court decision striking it down would take the wind out of the sails of those advocating for similar measures in other states and cities.”

O’Brien said city staff spent an extra couple of months to make sure the legislation was legally acceptable under federal labor laws. He understands why Uber would want to challenge it, but noted that local government was sued by businesses after similar labor laws were recently enacted in Seattle, like the $15 minimum wage regulation. It has won those cases.

“We try to be as smart as possible so we feel good about the legality of things we put forward,” he said. “This [legislation] is in that camp.”

At Monday’s meeting, Councilmember Tom Rassmussen said that “everyone expects this ordinance to be challenged in court.”

“But to me, that’s the cost of seeking innovative policies that addresses issues like income inequality and working conditions,” he said. “Seattle has often led the way with innovative policies. If this City Council or previous ones were to be discouraged from enacting reform legislation because of the threats of lawsuits, we wouldn’t have our early housing laws back in the 1960s, laws protecting the LGBT community from discrimination, the $15 minimum wage, or the mandatory sick leave ordinance.”

When asked for comment on potential litigation, Uber directed GeekWire to the statement it offered after Monday’s vote:

Uber is creating new opportunities for many people to earn a better living on their own time and their own terms. Drivers say that with flexible and independent work with Uber, 50% of them drive fewer than 10 hours a week, 70% have full-time or part-time work outside of Uber and 65% choose to vary the hours they drive 25% week-to-week.

Uber isn’t the only party with concerns. Mayor Ed Murray refused to sign the legislation, saying on Monday that there were several flaws within the ordinance and shared his worry with “relatively unknown costs of administering the collective bargaining process and the burden of significant rulemaking the Council has placed on City staff.”

Even without Murray’s signature, the legislation will still become law in 30 days since the mayor does not plan on vetoing the legislation, according to O’Brien’s office. Still, O’Brien said he’s committed to working with the mayor to address his concerns.

O’Brien noted that in the city’s recently-approved budget, there were financial resources specifically allocated to the department that regulates the for-hire industry. It also has the authority to raise fees it charges Uber, Lyft, and other transportation network companies (TNCs) to help the city manage a database of drivers and ensure they are licensed, O’Brien said.

He added that “I understand the department is already overwhelmed,” but noted that a minor fee increase to each TNC ride would help cover the cost of required resources.

“I think we’re talking about five cents per trip,” O’Brien said. “We’re not talking about significant changes in cost to a customer for this.”

It’s worth noting that this is all taking place in Seattle, where lawmakers have approved similar protections for workers like the $15 minimum wage, and paid sick and safe leave.

“This legislation is another expression of Seattle’s commitment to ensuring that workers have certain baseline protections,” said Garden, the Seattle University professor who specializes in labor law.

O’Brien noted that “there’s something about Seattle that allows us to move forward.”

“The political reality in this city is that the public wants us to be doing this type of legislation,” he added. “They elect people that will embrace it and conversely, if elected officials don’t, they will get punished by the electorate. Even in a city that has a large population of relatively wealthy people, we find that folks are still kind of tied to some very progressive values.”

O’Brien is clear that he doesn’t want to stifle innovation and technology from entering Seattle. But he’s equally as concerned that people can make a living wage.

“We are certainly a place where folks can be pro-innovation and pro new technology, but also be pro-worker,” he said.

It remains to be seen if Uber sues the city and what the outcome would be. Garden said that if the law holds up in court, she expects other jurisdictions to consider following Seattle’s lead.

“But those cities may well wait to see the outcome of litigation over Seattle’s law — and also how well the law works, if it is upheld — before deciding whether to adopt a similar one,” Garden noted.

Uber and Lyft have dealt with lawsuits and pressure from workers rights advocates over the past few years who contend that drivers should be classified as employees, not contractors. But the companies, which have both dropped ride rates for passengers in past few years, maintain that their service gives drivers flexibility to work when they want — in exchange, they lack benefits often provided to employees of traditional private companies.

Just last week, a federal judge expanded a class-action lawsuit by California Uber drivers looking to establish themselves as employees. In response, Uber sent all of its U.S. drivers a legal agreement that would let them opt-out of future class-action lawsuits, the San Francisco Chronicle reported.

Garden said she views the idea of flexibility as it pertains to Uber drivers, for example, as a bit of a “red-herring.”

“There’s nothing inconsistent between employee status and flexibility,” she said. “Uber may decide to limit drivers’ flexibility if a court or agency decides the drivers are employees — but that would be Uber’s business decision, rather than a legal requirement. And while flexibility plays a role in the legal analysis of whether drivers are employees, it is far from the only — or even the most important — factor.”

She added that drivers lose important workplace protections when they are considered independent contractors.

“To name a few, they are then exempt from minimum wage requirements, union rights under federal law, reimbursement for expenses, and non-discrimination requirements,” she said. “Some drivers may conclude that flexibility is worth losing all those protections, but many will not.”