It’s now cheaper than ever to catch an Uber ride in Seattle.

The on-demand transit company last week lowered prices of uberX rides in Seattle by 15 percent. You can now use Uber’s low-cost option and get around town for $1.10 per mile and $0.20 per minute, with a $1.25 base fare.

That’s about a 33 percent reduction on a per-mile and per-minute basis, and almost a 50 percent cut in the base far — all in less than a year.

But while riders enjoy cheap prices, what about drivers? Doesn’t this mean lower fares, and thus, lower profits?

Uber says otherwise. The company made similar price cuts in other parts of the U.S. during the past two months, and in a blog post outlining the changes, it described how drivers can actually make the same if not more money with the lower rates.

“The upside for the rider is obvious, but also important is that with the increased demand, drivers’ income goes up as well,” Uber writes in the blog post. “More demand turns into significantly more efficiency for the driver, more trips for every hour, and more earnings for every hour on the road.”

Uber, which has now raised close to $4 billion in its six years of existence, noted that in Chicago, earnings have gone up in the past year as fares went down. Something similar happened in New York City, too. 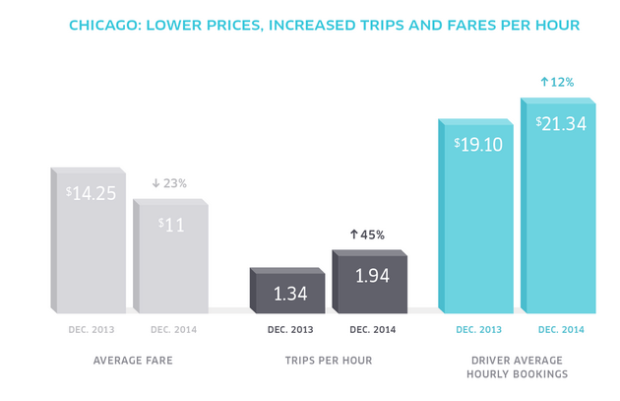 However, as some Uber drivers have noted, these stats don’t take into account the extra operating costs that drivers incur when they provide more rides.

Lyft, meanwhile, has been locked in a price war with Uber and is charging slightly higher than uberX in Seattle at $1.35 per mile, $0.24 per minute, and a $1.35 base fare. That’s also about a 35 percent cut from a year ago.