Today, streaming music service Rhapsody announced that it acquired Reveal Chat as it looks to “connect people around music.”

Reveal’s eight employees, including Soman, will join Rhapsody at its Seattle headquarters as a result of the acquisition. Terms were not disclosed.

“Together, we’ll continue Rhapsody’s mission to build the best way for passionate music lovers to discover new music digitally,” Rhapsody wrote in a blog post . “We have no doubt that Reveal Chat’s social DNA, community building experience and passion around building great mobile products will be put to quick use here at Rhapsody.”

We reached out to Rhapsody for more details, but the company declined to comment. 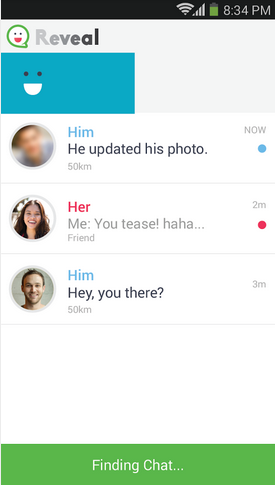 Soman, meanwhile, told GeekWire that Reveal will be shutting down. He said the app helped “connect millions of people around the world.”

But Soman said he saw a great opportunity to team up with Rhapsody.

“I’ve known the CEO of Rhapsody for a while, and when we got to talking recently about their upcoming plans to connect people through music, it became clear that there was overlap between our visions and a chance to do something special together,” Soman wrote in an email. “I’ve been a Rhapsody user since 2002 — it’s one of the first internet products I loved. And I’m incredibly proud of the team we’ve built at Reveal. We’re all music lovers, and we’re excited to join forces and help innovate.”

It’s been quite the past few years for Soman, who first created a matchmaking platform called LikeBright that was accepted in the Techstars Seattle program in 2011. It later reeled in money from Microsoft Ventures and prominent investors while also acquiring other startups.

While LikeBright was about dating, Reveal was more focused on curing loneliness and helping people make authentic connections. It did this by relying on anonymity, allowing users to reach out to anyone and then reveal information about themselves — name, photos, location, etc. — depending on how well the initial interaction goes.

The company had raised about $2 million in total — $1 million it brought in just before pivoting, and another $1 million it raised to build Reveal. Investors included Seattle super angel Rudy Gadre, former Amazon executive Owen Van Natta, and Porter Gale, former VP of Marketing at Virgin America.

Rhapsody, meanwhile, was a pioneer in the music streaming industry and still remains relevant, surpassing 2.5 million subscribers in 2014. However, despite increases in revenue and subscribers, the privately-held company still posted a $21.3 million loss in 2014.

Rhapsody, which spun off from Seattle-based RealNetworks in 2010, moved into a new space at downtown Seattle’s Columbia Center last year. This past August, it acquired two music discovery startups.