The Amazon.com truck first appeared on Seattle city streets earlier this week, creating a buzz among locals who wondered what the oddly-labeled beige vehicle was all about, and more importantly what might be inside. I spotted the truck cruising down 1st Avenue on Tuesday, causing this reporter to sprint a block to grab a couple pictures of the mystery vehicle.

This is a brand new way to shop Amazon. We have not done anything like this before.

Now, the mystery is over. Amazon.com is officially unveiling the Treasure Truck today.

What exactly is it?

Well, you can kind of think about it like a new shopping experience on wheels, allowing Amazon.com customers in Seattle to purchase one very special discounted item each day. 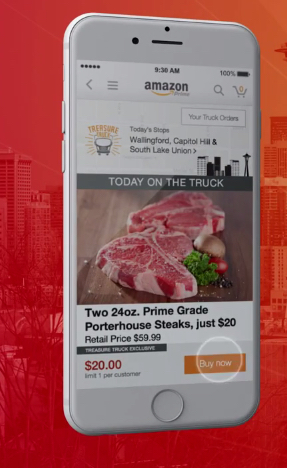 Here’s how it works.

Users of Amazon.com’s mobile app can browse the special deal of the day on the Treasure Truck, choose to make the purchase and then select a pre-determined location around Seattle where the truck will be stationed in order for easy pick-up.

“We really wanted to invent a brand new way for customers to shop Amazon. A really fun new way for them to interact with us,” said Sam Hall, consumables vice president at Amazon.com. “So, I guess, from that genesis the idea of the Treasure Truck was born.”

He said they’ve been working on the concept for several months, adding that they are really excited to get the truck distributing products to customers.

The Treasure Truck officially gets rolling this Saturday at 7 a.m. with customers able to purchase an inflatable paddleboard for $99 — 79 percent off the regular price of $476.99. Upcoming products for sale through the Treasure Truck include two porterhouse steaks and special edition Glassybaby votive candle holder.

Hall said there’s just one Treasure Truck in Seattle, and once it exhausts its daily supply of product — whether porterhouse steaks or paddleboards — the special sale concludes.

“Once we sell out for the day, the sale is done,” he said. Asked how many paddleboards they can fit in a truck, Hall said “a lot.”

At this point, the service is just available to Amazon mobile app users in Seattle. Hall declined to discuss whether the Treasure Truck would appear in other cities.

The concept is unique, and it signals yet another innovative way that Amazon is trying to get even closer to customers. The company rolled out its Amazon Locker system nearly four years ago, which we tested in this early video. It is also experimenting with package deliveries via drones, as well as new Amazon Prime Now distribution hubs. 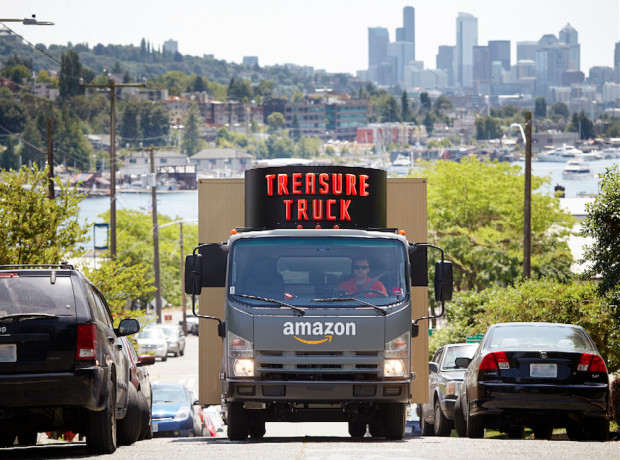 The Treasure Truck takes a different path, and Amazon is certainly having a little fun with its introduction, taking a more playful marketing approach. The company’s tagline: “What’s on the truck today?”

Hall said they wanted to keep the experience as simple as possible for shoppers. So, in order to collect the purchase, customers just need to give the driver their name.

Once confirmed, the delivery driver hands over the package. Customers who see the truck passing by can place an order directly via their mobile app, but they’ll only be able to pick up the item at a designated pick-up zone.

“We don’t want people running into the middle of traffic to flag down the truck,” said Hall (which is exactly what I did on Tuesday, despite a Seattle Police Department vehicle right in front of me).

The Treasure Truck plans to make stops throughout the greater King County area, from Ballard to Capitol Hill to Mercer Island. Asked if the Treasure Truck could travel as far south as Tacoma or as far north as Everett, Hall jokingly noted that “you never know where the truck is going to show up.” Hall said that they are going to experiment with various pick-up zones in the city.

Amazon really hasn’t played much in the daily deals arena, even though it purchased the Woot service back in 2010.

Hall, for one, thinks the Treasure Truck concept will resonate with customers in part because Amazon is planning to focus on unique items, some of which have never been sold through the online retailer’s Web site.

“We are really going out of our way to pick limited-availability, very-desirable deals for customers,” said Hall, adding that they want to sell hard-to-find or limited items that will appeal to shoppers. “We are going to have a broad selection of items, some of which might even be surprising for customers.”

For example, the company could sell a limited supply of the highly-touted Copper River salmon, or take advantage of the upcoming 4th of July holiday to sell American flags. It also could tailor certain deals to very specific geographies, or weather patterns.

“This is a brand new way to shop Amazon. We have not done anything like this before,” said Hall.

So, what happens if you buy something from the Treasure Truck, but you can’t make it to any of the pick-up zones?

Hall said they’ve made it easy for customers to cancel the order with a click. “We will figure out a way to keep our customers happy on this,” he said. “This is a brand new way to shop Amazon, and it is most important that our customers love this way to shop.”

Here’s a closer look at how the Treasure Truck works.