Amazon plans to convert a former auto dealership just north of downtown Seattle into a hub for its Prime Now one-hour delivery service, according to planning documents filed with the city of Seattle.

The property, formerly home to Toyota of Seattle, is slated to ultimately become the third block of Amazon’s new Seattle campus. But in the meantime, architects for the company have quietly filed a site plan labeled “Prime Now,” revealing plans to renovate the existing building.

City permit filings show a flurry of recent activity at the site, including mechanical and electrical upgrades, and a new security system.

At the site today, construction workers streamed in and out of the building. Several said the work is being done for Amazon, with one describing the project as a new distribution center. Workers also confirmed that the building isn’t being torn down in the short run. Part of the renovated space will be used for offices, and the rest for “mercantile,” according to the site plan.

Given the proximity to Amazon’s headquarters and its new campus, this would be a natural location for the company to test new concepts.

Amazon hasn’t yet responded to our request for more information about its plans for the property, and the company’s architects at Ware Malcomb in San Francisco were unavailable for comment.

The site, at 2121 8th Ave., is bounded by Blanchard Street, 8th Avenue, Westlake Avenue and Lenora Street. It is one of three locations for which the AmazonFresh grocery delivery service is seeking liquor licenses, as reported earlier this month. The company has also submitted liquor license applications for sites in North Seattle and Kirkland, Wash. 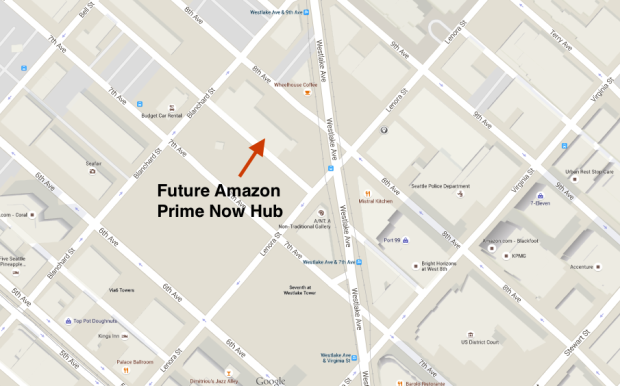 Amazon Prime Now, which debuted in New York last year, has steadily expanded across the country but has yet to launch in Seattle. The service, available to Amazon Prime members, costs $7.99 for one-hour delivery and is free for two-hour delivery.

Ultimately, the block is slated to become part of Amazon’s new multi-block development in Seattle’s Denny Triangle area, which connects via streetcar to the company’s current campus in Seattle’s South Lake Union neighborhood. Two of the initial three blocks in the development are already under construction.

We’ll update this post as we learn more about the company’s plans for the new Prime Now facility.

Separately this week, Amazon rolled out free same-day delivery for Amazon Prime members in 500 cities and towns across the United States, including the Seattle region.