Amazon is launching free same-day delivery today for more than 1 million items across a major swath of the U.S., covering 500 cities and towns.

Under the new rules, orders of more than $35 will ship for free, as long as the customer pays $99 a year to be an Amazon Prime member. Orders must be placed by noon to be received by 9 p.m.

Previously, Amazon charged Prime members $5.99 for same-day shipping. The price will remain the same for non-Prime users, who will have to pay $8.99, plus 99 cents per item for same-day orders.

“My focus is on how we can lower prices, and what can we do to make the lives of Prime customers better,” said Greg Greeley, VP of Amazon Prime, in an interview with GeekWire.

Starting today, eligible items will be have a new same-day shipping designation next to the Prime symbol, and customers will be able to search by zip code to see if their address qualifies for same-day delivery. 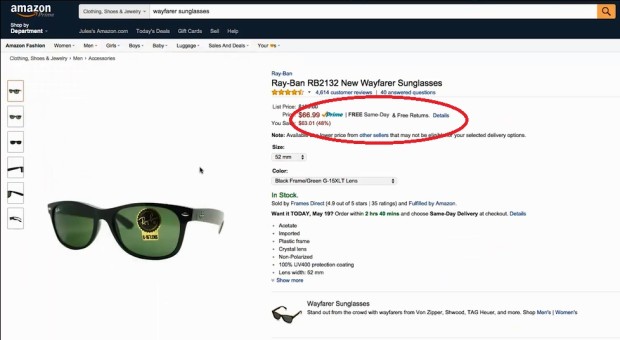 While that’s 14 total areas, the scope of each market is massive. For instance, the Seattle area stretches from Everett to Tacoma and from Seattle to Issaquah.

Initially, the number of eligible items will be limited to 1 million, but Greeley said it will include the things people most often request same-day shipping for. For instance, in Seattle, some of the more popular items include:  GoPro cameras, pet products, the Kindle Paperwhite, new video games and kitchen appliances.

“They are things you don’t necessarily need tonight, but you want tonight,” he said. “I think that list will continue to expand, particularly now that we’ve made it easy to find those items with the designated badges. They can run through their to-do list, and spend their afternoon on things other than running errands.”

We’ll keep innovating because we like to give members alternatives. Today, the next big thing for Prime members is introducing same day for free.

The launch adds to the growing list of benefits for Prime members, designed to keep Amazon ahead of the competition. Last week, Walmart announced it was launching a fast delivery program, and eBay is set to begin testing a similar service in Germany.

Greeley said today’s efforts are separate from that, and leverage Amazon’s ongoing investments in building more fulfillment centers, improving its software logistics and by working with a plethora of delivery providers.

“Prime Now is tens of thousands of items, such as everyday essentials and certain grocery items that you need in an hour. The breadth of selection [with same-day delivery] is the main difference,” he said. “We have this continuum. We’ll keep innovating because we like to give members alternatives. Today, the next big thing for Prime members is introducing same day for free.” 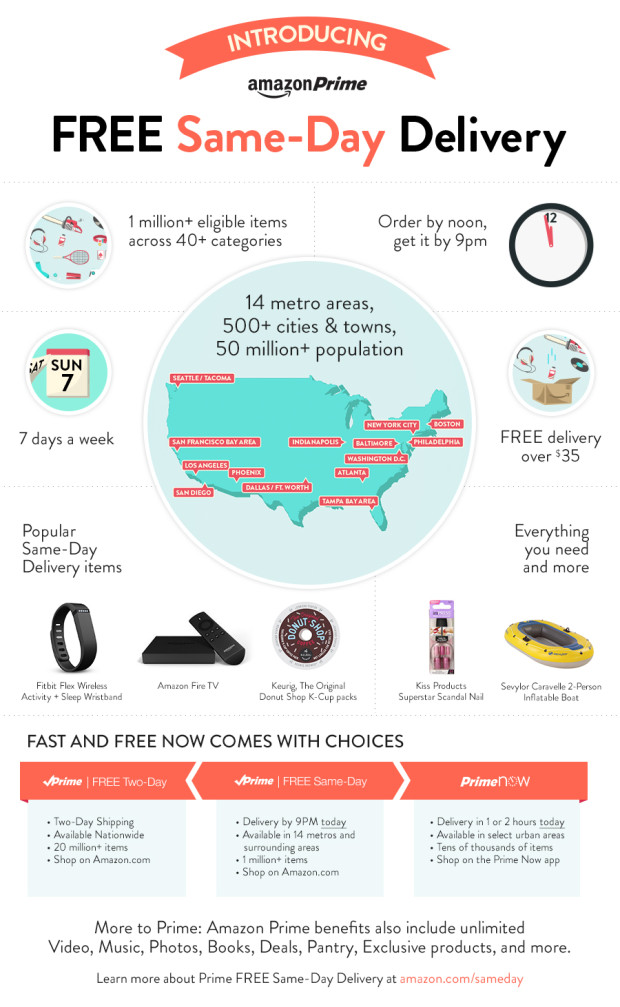