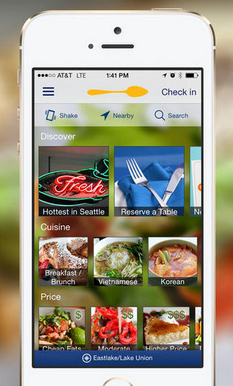 Zomato, a fast-growing restaurant directory that operates in more than 130 cities in 20 countries across the globe, has agreed to purchase Seattle-based Urbanspoon in a deal that will help cement the company’s much-anticipated expansion in the U.S., GeekWire has learned.

We’ve heard though an anonymous tip that the purchase price is in the range of $60 million, and that Urbanspoon CEO Keela Robison will depart as part of the acquisition.

Responding to our inquiry Sunday evening, Zomato CEO Deepinder Goyal offered further details to GeekWire under embargo for later this week, but GeekWire declined to agree to the embargo because we had already learned the news independently.

Zomato raised $60 million in venture funding in November from Sequoia, Info Edge and others, bringing total financing in the startup to $113 million. The company was founded in New Delhi in July 2008, and now counts more than 330,000 listed restaurants in Canada, Brazil, Ireland and other countries.

At the time of the funding, Zomato co-founder Pankaj Chaddah told TechCrunch that the fresh cash would be used to accelerate the company’s growth and “go after some key strategic acquisitions which will help us strengthen our market share across various countries.”

It appears that Urbanspoon — which was founded in 2006 and acquired by Internet conglomerate IAC in 2009 — is the first of those acquisitions in the U.S.

As of last summer, Urbanspoon claimed to have an audience of 30 million monthly unique visitors, two-thirds of which accessed the restaurant directory on mobile devices. TechCrunch last year pegged Zomato’s traffic at 30 million monthly visits.

Urbanspoon bootstrapped itself in the early years, riding to success in part through an innovative iPhone app that allowed users to shake the device in order to find nearby restaurants. The company sold off its Rezbook online restaurant reservation service to OpenTable in 2013, focusing efforts on its restaurant directory.

The Urbanspoon iPhone app remains one of the most popular restaurant directories, with over 230,000 reviews and a positive rating of 4.5 stars.

Given that, it should give Zomato a firm footing in the U.S. as it looks to help American diners find great restaurants.

UPDATE: In a blog post, CEO Deepinder Goyal confirmed the acquisition, noting that Urbanspoon will “turbocharge our growth and make our way into the US, Canada and Australia.” As part of the deal, the Urbanspoon app and Web site will be integrated with Zomato.

“Needless to say, the road ahead is a long one, and there are big challenges to overcome. For one, we’ll need to ensure that Urbanspoon’s website and app are integrated into Zomato smoothly over the next couple of months, without sacrificing the usability or utility of either,” writes Goyal. “Urbanspoon has built vast legions of faithful followers over the years, and we’ll need to work extra hard to ensure that the finished product is one that users and merchants alike will love and enjoy using.”

Later in the post, Goyal said that the company plans to pick a “fight” with Yelp in the market “they have dominated for so long.”

Follow up: Zomato confirms acquisition of Urbanspoon, plans to phase out brand as it looks to pick fight with Yelp

Previously on GeekWire: With a new CEO in charge, here’s the scoop on what’s next for Urbanspoon