Urbanspoon has been telling you where to eat for the past eight years —  now it wants to tell you what to eat.

In an interview with the company’s newly appointed CEO, Keela Robison told GeekWire that Urbanspoon has a major new initiative at the Seattle company that focuses on the “in-restaurant” experience.

For example, at Seattle’s Dahlia Lounge, diners loved the Dungeness Crab Cakes and gorged on made-to-order doughnuts, and at La Carta de Oaxaca, the tamales and tacos both get top marks. Visitors to the site are prompted to vote on their favorite dishes, or go to a landing page, where they can view more photos of a dish or participate in a conversation. 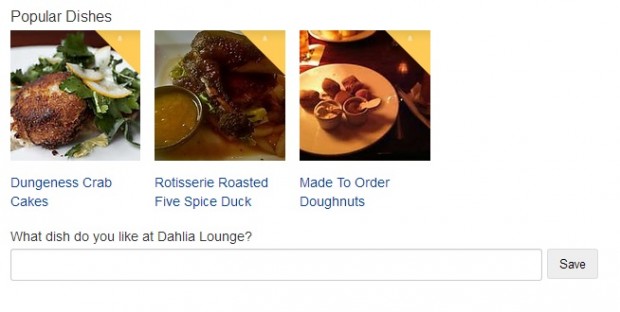 Robison, who was recently promoted to the position as CEO after serving as SVP and general manager for the past eight months, said they won’t stop with popular dishes. Next up, is providing a list of culinary definitions, which will help diners translate challenging items on menus. Other areas of interest include inking partnerships with daily deals companies to offer coupons or mobile payments providers to launch something similar to what OpenTable announced this week.

Urbanspoon first gained notoriety for being one of the earliest apps to take advantage of the iPhone’s built-in accelerometer, by making “shaking” a central element of its interface that allowed customers to find nearby restaurants. That early success in mobile helped lead to a 2009 sale to IAC, which promised to drive traffic to the site from the company’s other brands, including About.com and Citysearch.

But five years later, it still cowers in size compared to the competition, so identifying new opportunities is essential to the company’s growth.

Urbanspoon claims to have an audience of 30 million monthly unique visitors, which is two-thirds mobile and growing at a rate of 40 percent year over year. In comparison, Yelp has 138 million monthly unique visitors, and operates globally in more than a dozen countries. IAC does not break out Urbanspoon’s revenues, and Robison declined to share its financial performance.

International expansion is also a goal Robison has, but for now, she says the bigger emphasis on expanding the in-restaurant experience.

Prior to working at Urbanspoon, Robison was VP of GameHouse, a division of RealNetworks, and before that, she was at Amazon, where she oversaw a group of 30 employees working on the Amazon Fire Phone. Her background also includes stints at WhitePages and T-Mobile.

Urbanspoon was able to launch popular dishes with “hundreds of thousands of recommendations” thanks to a partnership with Chefs Feed, where real chefs provide feedback what to order at a restaurant. It also scoured its current reviews to discover what food diners were already recommending. Rather than relying on technology to identify trends, Robison said they spent the additional money to have people do the work, so that the algorithms didn’t misinterpret each mention as positive feedback.

“For the most part, this hasn’t been addressed by Yelp or Foursquare,” she said. “In talking to our customers, we found that over 80 percent of our customers are interested in dish-level recommendations…It’s the small little things that make the dining experience so much better when you can order with confidence and have a good experience overall.”