Amazon surprised and stunned Hollywood and audiences this month with its win for Best Comedic Television Series at the Golden Globes with “Transparent,” and its several announcements of new movies and programming, including one TV series that will be created by none other than Woody Allen. 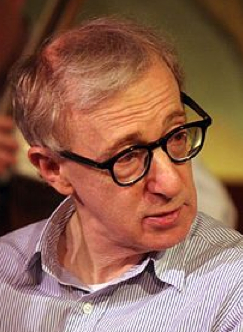 The response to Allen, a divisive figure to put it mildly, has been across the board. Is he considered a great American writer/director who has given us some of the most delightful movies in history? Yes. Could he also be considered an alleged predator? Well, yes.

The outcry comes less than a year after Allen’s adopted daughter with former partner Mia Farrow, Dylan Farrow, published an open letter in the New York Times, accusing Allen of sexually assaulting her.

Upon Amazon’s announcement, the women’s site Jezebel, known for its funny, frank feminist humor, took to the Internets with “Here’s What to Expect from that Woody Allen Series Coming to Amazon” with a fake pitch meeting: “Yeah, they’re f**king. And she’s young and hot. And he’s old and a genius — seriously, there’s no smarter guy in the world.”

The Daily Beast also had its say, under the headline “Hollywood Forgives Woody Allen. Dammit“: “Amazon’s Golden Globe wins for Transparent on Sunday night were especially cool not just because they represented the legitimacy of a young streaming service, but because the show itself stands for something noble and important. Transparent and the success of Amazon represents forward progress. Its partnership with Allen represents countless steps back. For all of us.”

Other sites, including Jeff Bezos’ Washington Post, also called it a “step backward for the streaming revolution.” The Atlantic, points out the other big question: Is Allen even still up to the task of making engaging TV programming?

“He won an Oscar just three years ago for writing the breezy Midnight in Paris, and within the past decade Blue Jasmine and Vicky Christina Barcelona have both won high praise for their performers,” the article states. “But Allen’s output has been undoubtedly scattershot since the mid-‘90s, with a series of duds usually surrounding every mild-to-moderate hit.”

I admit, I like a lot of Allen’s movies.

His work can be smart, has fun dialogue and can really nail people’s insecurities. However, there is that gross “ick” factor he gives women at best — the heinous accusations of abuse at worst. I recently rewatched Manhattan and was seriously creeped out about his relationship with Mariel Hemingway’s character, a 17-year-old girl who was having an affair with Allen’s character as a 40-something man. And let’s not forget the 800-pound gorilla in the room: the fact that he had a relationship with and married Mia Farrow’s adopted daughter, Soon-Yi, when she was barely 20. And he was solidly mid-50s.

His best recent work keeps him completely out of it — Matchpoint, Blue Jasmine — instead focusing on, ahem, characters having more age-appropriate relationships found in sexy locations and “society” towns. This might be Amazon’s biggest gamble since the Fire Phone.