Computer science is taking over classrooms all across the world this week thanks to a Seattle-based non-profit.

Code.org is organizing its “Hour of Code” event for the third consecutive year as part of Computer Science Education Week. Starting today, students will have the opportunity to learn about programming with free online tutorials and instructional videos at 191,000 events in more than 180 countries. One-third of all U.S. schools are participating, and Code.org says it expects to reach 50 million students this week.

Creating technology is about connecting us all — from France to Pakistan to Brazil to Cambodia to the US #HourOfCode pic.twitter.com/W5KIsFckK7

Founded in 2013 year by brothers Hadi and Ali Partovi, Code.org offers free online learning courses to help expand participation in computer science. Along with other organizations encouraging computer science education, Code.org is already having an impact with school districts all around the world adopting curriculum that teaches programming skills. It has inked key partnerships with companies like Microsoft, Apple, Disney, Lucasfilm, and more, while having people like Bill Gates and President Barack Obama tout the importance of computer science education.

There were several Seattle-area organizations participating in “Hour of Code” events at schools around the region. Here’s a quick round-up of the coding activity.

Nadella spent the first part of his morning teaching fourth-graders how to code using the new Hour of Code Minecraft tutorial that Microsoft unveiled last month. The tutorial, which is available for free, walks students through 14 levels. It looks and feels like the Minecraft game that kids are so familiar with, but they have to use basic computer science principles to play. Students click and drag blocks to form a string of commands. They click “run” and their character carries out the actions. 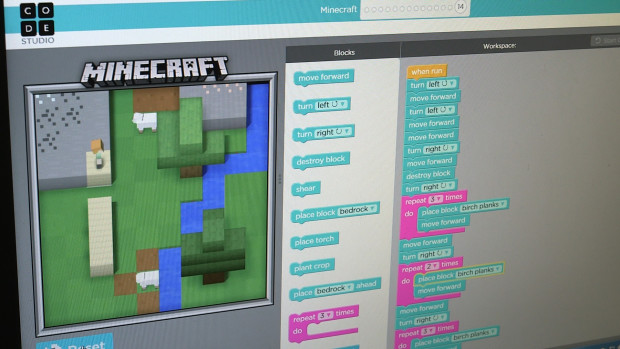 Wilke then spoke to the students at an assembly, where students themselves taught the Amazon exec how to complete the Minecraft tutorial. The Amazon exec joined Code.org’s Alice Steinglass to give Rainier View Elementary School the $10,000 donation.

Microsoft also hosted Hour of Code events at its stores across the world and at other schools.

Microsoft kicked off #HourOfCode with a workshop at our NYC Flagship inspiring kids to do great things with code. pic.twitter.com/HsLQsrInwy

Newly-appointed University of Washington President Ana Mari Cauce spent an hour with a small group of students on campus Monday morning going through tutorials on Code.org’s website and learning to code.

The UW also hosted a separate event at the largest lecture hall on campus, where about 100 students invited a friend or family member to try coding for the first time.

The UW is hosting a series of similar events throughout the week and expects to have more than 400 people participate in Hour of Code lessons.

Each of the 400-plus students at Queen Anne Elementary participated in Hour of Code on Monday, along with 45 parent and community volunteers who helped the kids learn about computer programming.

Here some scenes from other Hour of Code events around Seattle:

Our students had a blast doing #HourOfCode today! Thanks @codeorg @hourofcode pic.twitter.com/5uQR1FQILA

Giving #HourOfCode sessions at #ingaraham high school. Awesome to see the students learning how to code with @splunk pic.twitter.com/2Fby7fEeYN

President Obama helps us kick off the #HourOfCode #QAE pic.twitter.com/ww7cXITVuw

And we're off and coding during the #HourOfCode at #holyrosaryws! pic.twitter.com/GuX2Ro3rpv