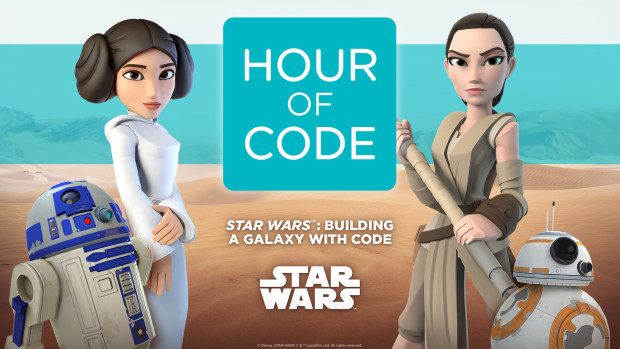 Millions of fans are anticipating Star Wars: The Force Awakens, dissecting the trailers and trying to get any glimpse possible of the new characters in the upcoming film. So why not use The Force to teach a new generation of kids to code?

That’s the idea behind a new partnership between Code.org and Disney’s Lucasfilm, which today unveiled a new Star Wars-themed computer science tutorial for the upcoming Hour of Code campaign during Computer Science Education Week. The tutorial features the classic characters Princess Leia, C-3PO and R2-D2 — as well as the new character Rey and the droid BB-8 from The Force Awakens.

“It’s such a unique chance to be giving students (and adults) their first chance to really interact with some of the new characters in Star Wars: The Force Awakens,” said Hadi Partovi, CEO and co-founder of the Seattle-based nonprofit Code.org, via email this morning.

The tutorial, called “Star Wars: Building a Galaxy with Code” will be available for free in more than 180 countries. It launched today in preview form, giving students a chance to build their own Star Wars games using drag-and-drop blocks and Javascript. The experience will be refined between now and the Hour of Code campaign, set for Dec. 7-13.

It’s no coincidence that the tutorial features two female characters, Leia and Rey. It’s part of a broader campaign to get more women and girls involved in computer science. Code.org partnered with Disney last year in a similar way for tutorials featuring Anna and Elsa from the hit movie Frozen.

Code.org says 43 precent of students who use its online Code Studio are girls, and 37 percent are black or Hispanic. (Code Studio also features a variety of other characters from franchises including Angry Birds, Plants vs. Zombies and the movie Ice Age, among others.)

Code.org first pitched Disney on the “Force Awakens” collaboration in February, and it took months to work out the details of the partnership.

Partovi explains, “We began the work at the beginning of the summer, and due to Lucasfilm’s strict requirements on secrecy we had only a few people at Code.org who even knew about the project, and they had to work in a locked room with no windows so that nobody else could find out.”

The Walt Disney Co. is also donating $100,000 to Code.org’s afterschool programs. As part of Hour of Code, one classroom will win a trip to San Francisco to get a behind-the-scenes glimpse of the new Star Wars movie courtesy of ILMxLAB, a joint initiative of Lucasfilm, Industrial Light & Magic and Skywalker Sound. Robotics company Sphero and PC maker HP are among those chipping in with prizes, as well.

Code.org is also learning some lessons from Star Wars for building anticipation among fans. Partovi teased ahead by saying that this isn’t the only big tutorial the nonprofit will be launching for the Hour of Code this year. “As Yoda would say, there is another,” he said. “Coming in a week. And it’s also just as HUGE. Stay tuned.”