Every day we hear stories about the labor shortage in the tech industry, and how not enough students are studying science, technology, engineering and math.

Well, it’s time we do something about.

Starting today, GeekWire is taking an active role in helping to solve this critical need, launching a new program in conjunction with Bank of America to raise funds for the Washington State Opportunity Scholarship.

This new effort — announced today at the GeekWire Summit and dubbed Geeks Give Back — will help support low and middle-income students in Washington state pursue STEM degrees.

Together with Bank of America, we’ve set an ambitious goal to raise up to $500,000 over the next two months  — money that will directly impact the technology industry by helping deserving students with much-needed scholarships.

To hit this goal, we need the tech community’s help, and we’re asking companies of all sizes to get involved by making a donation to WSOS. 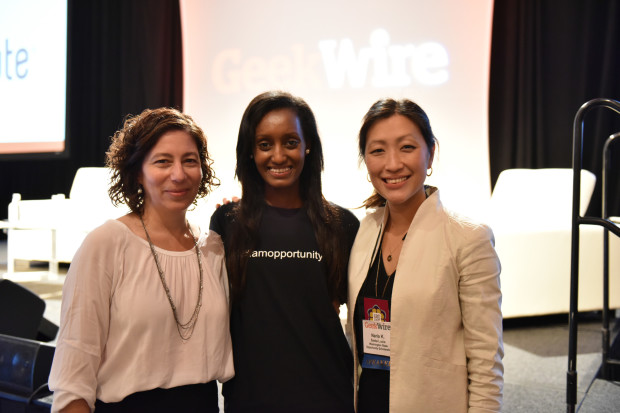 Speaking at today’s GeekWire Summit, Nuguse described how the scholarship allowed her to be the first in her family to attend college and explained why it means so much to her.

“Without this scholarship, I wouldn’t be pursuing a computer science degree at the University of Washington,” Nuguse said. “And I’m sure I wouldn’t be speaking at the GeekWire Summit.”

Nuguse added that in 10 years, she’d like to open an innovation center that helps anyone — including women and people of color — be inspired to start a STEM-related career.

“Don’t ever think that you can’t impact a young person’s life,” Nuguse said.

Both WSOS recipients are telling their stories at this year’s GeekWire Summit, and we’ve been overly impressed with the brain power of the students we’ve met who participate in this unique program.

We ask that you join us in supporting Geeks Give Back, making a donation to WSOS and helping to support the next generation of scientists and engineers.

“Education is fundamental to the creation of bright economic futures for young people in Washington state,” said Anthony DiBlasi, Bank of America president for Washington state. “By partnering with GeekWire and WSOS, we’re making STEM fields more equitable and diverse, creating a homegrown STEM talent pool, which in turn helps our region’s technology companies and innovators attract and retain the most talented workforce.”

The other great thing about getting involved with WSOS is that all donations are 100 percent matched by local companies and Washington state, which means every dollar you give multiples into $4.

We’re so excited to launch Geeks Give Back, and work alongside Bank of America and WSOS to make sure that deserving students have an opportunity to pursue their dreams.