The next time you begin to run out of detergent or your printer starts to run low of ink, Amazon might know it before you do.

The Seattle e-commerce said today it expanding its Dash Replenishment Service today, which will be integrated into a wide variety of devices that will be smart enough to automatically place orders when supplies are running low. 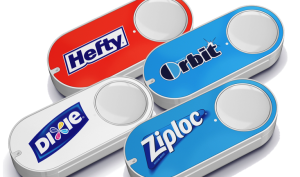 This summer Amazon widely launched the Dash button, a small plastic button designed to be stuck or hung anywhere in your home, that allowed you to instantly reorder products, like toilet paper or diapers, with a single click. Today’s announcement focused on the Dash Replenishment Service, which is expanding from a small handful of partners already announced earlier this year.

At first glance, when the Dash Button was first announced, people thought it was an April Fool’s joke, but clearly Amazon is pushing forward with the concept of ordering things before you even know you need them.

As of this summer, the company said customers can start ordering Dash buttons for $4.99 apiece.